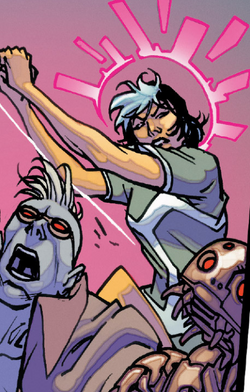 Tempus was with her teammates at the Blackbird when they received a telepathic message from Baron Grey to help the other X-Men after being ambushed by Genosha's Press Gang.

Tempus arrived with Gambit and Longshot to the battle when they noticed that their own team was fighting against them. When Longshot came to the same conclusion as Tempus about a telepath being behind this, Tempus herself became possessed by Karma and punched Maggott to the ground.

After their plane was destroyed Tempus's powers were used to help the Press Gang escape back to Genosha with their captives.[1]

She was seen being freed from her cell after the resurrected Cameron Hodge perished once again due to the combined forces of everyone.[2]

Seemingly those of the Eva Bell of Earth-616.

Seemingly those of the Eva Bell of Earth-616.

Like this? Let us know!
Retrieved from "https://marvel.fandom.com/wiki/Eva_Bell_(Earth-24201)?oldid=5669834"
Community content is available under CC-BY-SA unless otherwise noted.