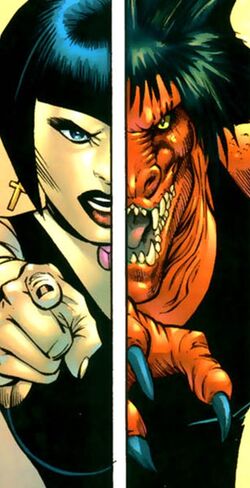 Vange Whedon is a lawyer and a member of the Mutant Rights Coalition (or Mutant Rights League). Her ability to shapeshift is triggered when she comes in contact with blood. Evangeline used to be a successful prosecutor until others soon learned that she was a mutant. She was fired instantly and evicted from her apartment the next day. Her fiancé left her with an e-mail and her family disowned her.[1]

When the X-Men Bishop and Sage were being held in police custody, Whedon and the Mutant Rights League staged a protest for their release. While Evangeline was talking to Detective Cardones, a human struck the detective with a brick. The blood from the wound dripped on to Whedon, and caused her to shapeshift involuntarily. She transformed into a beast that resembled a dragon, and was out of control. Sage was able to stop Vange momentarily, while Bishop calmed her down enough to revert to her human form.[2]

Evangeline was called to Los Angeles when the X-Men needed legal help. Evangeline succeeded in getting Marie D'Ancanto, an anti-mutant terrorist given a second chance by the X-Men, under probation and hired her as an assistant. Evangeline also helped the X-Men against a lawyer secretly working for the psychic mutant Elias Bogan.[3]

She kept her powers after the Decimation of the mutant population, the government considers her a 'Significant' national security threat.[4]

Evangeline joined later the mutants on Utopia and was among them when the Nimrods were invading the island.[6]

She was later put on the case of Primal (Teon Macik), when his parents wanted him back, but wasn't really motivated into helping the X-Men.[7]

Blood Related Dragon Morphing: Able to shapeshift into a dragon after coming into contact with blood.

Like this? Let us know!
Retrieved from "https://marvel.fandom.com/wiki/Evangeline_Whedon_(Earth-616)?oldid=5165160"
Community content is available under CC-BY-SA unless otherwise noted.