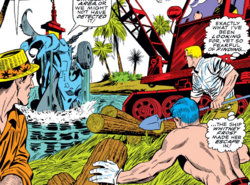 The Florida Everglades are a subtropical marshland, located in the southern portion of the U.S. state of Florida.

Somewhere in the vast Everglades, Jasper Sitwell and other S.H.I.E.L.D. agents recovered the wreckage of Whitney Frost's escape vehicle.[1]

After breaking out from the Vault, the Lizard returned to the Everglades, leaving a trail of blood across half the United States.[2]

Back to the old Spanish fort, he found it occupied by a construction site: there he was confronted Warrant, a bounty hunter with a license to kill. Thanks to Spider-Man's timely intervention, Lizard escaped in the mud, nowhere to be found.[3]

Like this? Let us know!
Retrieved from "https://marvel.fandom.com/wiki/Everglades?oldid=6409591"
Community content is available under CC-BY-SA unless otherwise noted.