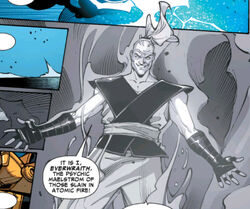 Everwraith is the astral embodiment of all the people that died during the nuclear attacks on Hiroshima and Nagasaki at the end of World War II. [1]

It initially ploted revenge against the United States of America but decades later, realized that Japan had excelled both financially and technologically; it then believed this was a result of the atomic attacks. In the Modern Era, Everwraith started to disappear, as the Japanese started to forget the anger that formed him. [1]

However before departing it wanted to leave a last gift to Japan: a new nuclear attack horror, believing this was the only thing that will make Japan grow even further. It saw its opportunity when an electromagnetic pulse released by Magneto caused the Japanese hero Sunfire's atomic-based powers to go out of control. [2]

Everwraith also kidnapped Hiro Takachiho's mother in hopes that this would put him in conflict with Sunfire. However when his plan was discovered, Hiro ended up joining the Japanese super hero team Big Hero 6. [3]

Like this? Let us know!
Retrieved from "https://marvel.fandom.com/wiki/Everwraith_(Earth-616)?oldid=5642430"
Community content is available under CC-BY-SA unless otherwise noted.