Everyone Is a Target 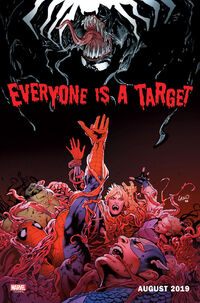 Official Name
Everyone Is a Target

In the 1980's, a tourist from Indiana arrived in New York, unaware that a chance sighting of Symbiote Spider-Man was a portent that could spell his doom.[1]

Years later, serial killer Carnage was resurrected by an apocalyptic cult and bonded to a primordial symbiote to become more powerful than ever.[2] Seeking to unleash the dark god Knull, Carnage assembled an army of symbiote-infected homeless people and animals, and began hunting down everyone on Earth who has ever bonded to a symbiote.[3]

As the War of the Realms ravaged the Earth, Carnage and his army bided their time in the sewers and subways;[4] meanwhile, Deadpool had a dream of the four Life Foundation symbiotes - Phage, Riot, Agony, and Lasher - succumbing to Knull's control.[5] After the War ended, Spider-Man realized something was amiss when he encountered a flock of symbiote-infected pigeons,[6] and Carnage's minions began roaming the country hunting for former symbiote hosts.[7][8][9] Monitoring the whereabouts of Bruce Banner's known associates, the US Hulk Operations discovered that the grave of Thaddeus Ross - the former Red Hulk, who had once briefly bonded to the Venom symbiote - had been disinterred, with traces of red-and-black symbiote ooze left behind.[10] Carol Danvers' pet Flerken, Chewie,[11] was ambushed and taken over by the Grendel symbiote in preparation to claim her Venom codex; while a horde of symbiote-controlled homeless people and animals marched on Avengers Mountain to claim Captain America's Carnage codex.[12] Carnage sending his horde marching orders did not go unnoticed by the media, which proclaimed a "Homeless Exodus".[9]

Retrieved from "https://marvel.fandom.com/wiki/Everyone_Is_a_Target?oldid=6030437"
Community content is available under CC-BY-SA unless otherwise noted.