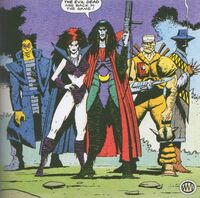 Base of Operations
Formerly Evil Dead's Base, The 'Pool
Affiliations

The Evil Dead were one of the strongest Game teams in the 82nd century. They were infamous for their brutal tactics.

Each of 8155-8157, the Evil Dead came second in the top League Of Nations of the Game. In 8158, their play-off against the Split Infinity team, later dubbed the Miami bloodbath, resulted in the deaths of three of their opponents as well as 153 civilians, bringing their body count up to 498. In the aftermath, the World Development Council decided to cancel the Game completely.[1][2]

In 8162, 49 military policemen perished in a failed attempt to eliminate the rogue ex-players of the team. At that time, the team was led by Slaughterhouse and consisted of Death Nell, Feral, Hex, and Kronos.[1] Following that success, the Evil Dead broke into the Halsworth Armoury in further defiance of the National Union of Retired Sports Experts. The reactivated Dragon's Claws were then assigned to deal with them. During the confrontation in the 'Pool, the Evil Dead's base of operations, Feral, Hex, Kronos were killed, while Death Nell and Slaughterhouse barely made it out alive.[3]

Retrieved from "https://marvel.fandom.com/wiki/Evil_Dead_(Earth-5555)?oldid=5003044"
Community content is available under CC-BY-SA unless otherwise noted.