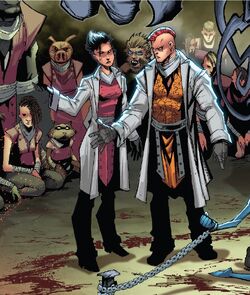 The Evolutionaries were an occult/scientific sect devoted to the Elder God Mephicthton. Following their twenty-second failure in the combined efforts of sorcerer Herbert Wyndham and scientist Sarah Kinney to create a perfect vessel for Mephicthton, Sarah proposed to conceive the vessel herself, and gave birth to Laura. Sarah nurtured Laura, whereas Herbert only only had her train under Hellhound's tutelage to become the perfect assassin, Weapon Hex. When Laura was eighteen years old and Herbert decided to make the preparations for the ritual to have Laura contain Mephicthton, Sarah tried to escape with Laura, but Herbert used a triggering spell to have Laura kill Sarah herself.[1]

Weapon Hex rampaged through the Evolutionaries' Keep to find her secret clone/sister Speed Weasel, whose existence Sarah had revealed to Laura with her last breath. Herbert and Hellhound intercepted them when they prepared to escape, and Wyndham decided to use Speed Weasel as the vessel instead. As part of the preparations for the ritual, Wyndham and Hellhound murdered all of the Evolutionaries' test subjects. Wyndham proceeded with the ritual, and pulverized Weapon Hex with a magic lightning after Laura had killed Hellhound. Laura returned to life, and called upon the spirits of all that died as a result of Wyndham's plans. The ghouls mauled Wyndham to death while Laura broke Speed Weasel free from Mephicthton's influence. The two sisters then left the Evolutionaries' Keep.[2]

Retrieved from "https://marvel.fandom.com/wiki/Evolutionaries_(Warp_World)_(Earth-616)?oldid=5021525"
Community content is available under CC-BY-SA unless otherwise noted.