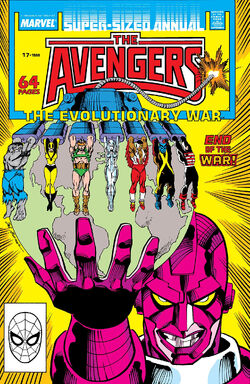 The High Evolutionary is revealed to have survived his suicide attempt, and has rededicated himself to guiding and enhancing the evolution of humanity so that his race may one day be supreme to all others, including the Beyonders. To this end he initiates several concurrent efforts to accelerate human evolution and eliminate perceived threats to mankind's genetic purity.

He sends his Purifier troops into Subterranea to sterilize the simple-minded races that dwell there. However, the discovery of a mutant Moloid, Valor, attracts the intervention of X-Factor and Apocalypse. The Evolutionary is ultimately convinced that the Subterraneans indeed have genetic potential and ceases his operations there.[1]

In Bogotá, the Evolutionary's Eliminators are dispatched to exterminate a Colombian drug cartels. The Punisher discovers the battle and dispatches with both sides.[2]

Meanwhile the High Evolutionary visits the Eternals and persuades them aid his cause by mapping the genetic code of the Silver Surfer. The Surfer refuses the cooperate and convinces the Eternals to let him be.[3]

The Purifiers set about removing the powers of mutants deemed to pose a threat to humanity. When they capture Magma from Nova Roma, the inner circle of the Hellfire Club and the New Mutants storm the Purifier base in Wyoming to rescue her. During the struggle, Mirage inadvertently has her powers enhanced, allowing her to physically manifest the illusions she casts.[4]

With the supply of drugs cut off by events in Bogotá, a drug war escalates in New York City, made worse by the Purifiers murdering drug dealers. Seeking to retaliate against the ones who disrupted his drug trade, the Kingpin learns about the High Evolutionary's scheme and allows the information to reach Spider-Man and Daredevil. Along with Speedball, they defeat the Purifiers before they can enact the High Evolutionary's plan to sterilize all undesirable individuals in the city.[5]

The Exterminators attempt to seal off the Nexus of All Realities in the Everglades to prevent extra-dimensional entities from polluting humanity's genetic stock. One such entity known as Ylandris takes possession of Cecilia Cardinale, transforming her into Poison in order to stop the Evolutionary's plan, while Spider-Man and the Man-Thing defeat the Exterminators.[8] In the broadest part of his plans, the High Evolutionary plots to construct a bomb that will genetically alter all life on Earth. He sends the Gatherers and a superhuman team known as the Sensors to Wakanda to obtain vibranium necessary for completion of the bomb. Unbeknownst to the Evolutionary, one of the scientists he has forced into his service is Bill Foster, who surreptitiously alerts the Black Panther to the situation. The Panther and the West Coast Avengers defend Wakanda but are unable to prevent the theft of the vibranium. Coincidentally, Moon Knight, Tigra, and Mockingbird happen upon the High Evolutionary's citadel in the Savage Land and rescue Foster, who recovers his Giant-Man powers. With the security of his base compromised, he relocates his base to the floor of the Pacific Ocean.[9]

Before completion of the genetic bomb, the High Evolutionary sends Gatherers to capture a rogue clone of Gwen Stacy for further study, while he visits the Young Gods. Some of the Young Gods decide to interfere with the Evolutionary's master plan, and encounter Spider-Man trying to rescue the clone. The High Evolutionary claims that "Gwen" is not in fact a clone but someone genetically altered to resemble the original Gwen Stacy, and returns her and Spider-Man to Manhattan. Daydreamer of the Young Gods restores the woman's original memories and appearance.[10]

The Evolutionary's researchers reassemble Jocasta, who immediately turns on her captors and attempts to contact the East Coast Avengers about the genetic bomb. However, the team has disbanded and abandoned their headquarters, leaving its computers to assemble an ad hoc team of inactive reservists: The Captain, the Falcon, Hercules, the Beast, and the Hulk. Yellowjacket (Rita DeMara) answers the summons (which she received via the communications equipment she stole from her predecessor and is allowed to join the team. Using the High Evolutionary's own equipment, the Avengers hyper-evolve Hercules until he is able to match the Evolutionary's power in combat. Both Hercules and the High Evolutionary are apparently destroyed in the battle, leaving the Avengers free to stop the genetic bomb and save the world.[11]

What The--?! #4 included a reference to a similar event, the "Ablutionary War", instigated by the villain High Ablutionary to cleanse the earth from evil, and eventually stopped by some of the X-Persons. All this happened in Earth-9047 (the Humorverse).

Retrieved from "https://marvel.fandom.com/wiki/Evolutionary_War?oldid=5790170"
Community content is available under CC-BY-SA unless otherwise noted.