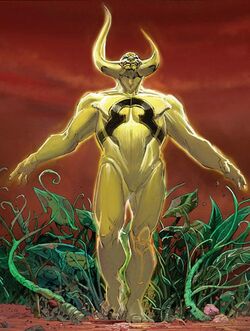 Here's the thing about life, Roberto Da Costa... Most people don't really understand it. They perceive it in terms of their own existence--Their own birth, the birth of their children... They measure life by the time they have in theirs. This is life as an extension of love, there's nothing wrong with it... But it is not life unfettered. It's not life as a primal force. It's not the violent struggle of life--It's a bubble making it's way to the surface of a sea. I see life as a perfect sphere, called a planet, resting the perfect distance from a perfect sun. The vast majority of the universe is nothingness. I know this... It is the absence of life. This is how I see it. Understand? Life is a miracle in the face of the lifeless void. What you face now is the end of all miracles. A return to an equilibrium called nothing. But I am Ex Nihilo--I am life. And I will not stand for such a thing. I have to go.

Ex Nihilo was one of the Gardeners carried along with his sister, Abyss, as an egg by an Aleph. In accordance with their mission as creations of the Builders, Aleph taught them to transform into perfect creatures any species they encountered.[1]

After arriving on Mars, they terraformed the red planet, creating an atmosphere and vegetation. They flash-shepherded years of evolution in hopes of creating a "perfected" version of mankind. After he shot an Origin Bomb at Earth to accelerate the evolution of mankind, which affected almost two million people, the Avengers scrambled a response team. Not interested in fighting, Ex Nihilo tried to accelerate Iron Man's evolution so that he no longer needed an exoskeleton. When Black Widow and Hawkeye retaliated, he became angry and attacked them. In the brawl, Ex Nihilo and his allies defeated the heroes and imprisoned them. A helpless Captain America was sent back to Earth as a message.[2]

Awakening three days later, Cap implemented the Avengers initiative "Wake The World", the team's most massive assemblage to date. Ex Nihilo's intervention started being "world-razing" for Aleph, which would force him to destroy the Earth if Ex Nihilo failed to polish this planet.[1]

The cavalry arrived as soon as Nihilo's first human was fully developed. He and his allies fought the Avengers until they noticed the presence of Captain Universe, newly an Avenger. Nihilo and his allies recognized her as a power beyond them they must obey. Captain Universe ordered Nihilo and Abyss to stop their crossing to transform and/or destroy "imperfect" worlds. However Aleph resisted and was finally destroyed by the heroine. Finally, before returning home, the Avengers established that Nihilo could reform Mars as he pleased as long as he did not interfere with Earth.[3]

After the Universe experienced a White Event, Nihilo's first human Adam, became the Nightmask.[4] After the activation of the Star Brand, Nightmask and Star Brand traveled to Mars, explaining that as the byproduct of a newer system, they were at odds with the older one, the Garden, leading them to seek out and confront Ex Nihilo.[5]

When Captain Universe sensed a new threat coming to Earth, she advised the Avengers to recruit Ex Nihilo and his sister into the team, which they did.[6]

When the Avengers opposed the Builders, who were making their way through the universe to destroy Earth, Ex Nihilo encountered numerous other individuals of the Gardeners, his species.

Ex Nihilo learned that after the creation of a new universal structure and the mysterious death of almost all the Abysses except his, the Builders recalled all the Gardeners and forbade them from harvesting worlds, and the Gardeners were relegated to being servants to those who created them.[7] Resentful for how the Builders had downgraded them, the Gardeners helped their brother to wake up Captain Universe, and turn the tide of the conflict to favor the Avengers.[8]

After the defeat of the Builders and Alephs, the Gardeners returned to their work of growing life in worlds.[9]

Due to the contraction of the Multiverse, the universe started decaying, and the Gardeners attempted to fix it, but couldn't. When the coalescing center of this decay focused on a single point, the Earth, the Gardeners and Abyss returned to Earth to investigate.[10] Once on Earth, the Gardeners were able to see its whole system and find that the planet had scars. They were offered by Bobby Da Costa a one-way trip to investigate the origin of this decay by using A.I.M. technology and travel across the Multiverse.[11]

The Avengers traveled across numerous universes, navigating the map left by the Mapmakers. After one last jump across universes that cost Nightmask's life, the Avengers found themselves face to face with a fissure in time and space. From it, two Beyonders emerged and demanded the heroes to fall back. Upon denying their request, the Avengers faced the Beyonders. In an attempt to reprogram one of the Beyonders, Abyss and the Ex Nihili sacrificed themselves.[12]

Chlorokinesis: Ex Nihilo can control plant movement and growth. The full extent of his powers are so far unknown.

Advanced Longevity: Ex Nihilo, like all members of his race also have an advanced lifespan.

Pyrokinesis: Like all members of his race, it is possible that he is able to exhale fire from his mouth like Jerran Ko.

Like this? Let us know!
Retrieved from "https://marvel.fandom.com/wiki/Ex_Nihilo_(Earth-616)?oldid=5765780"
Community content is available under CC-BY-SA unless otherwise noted.