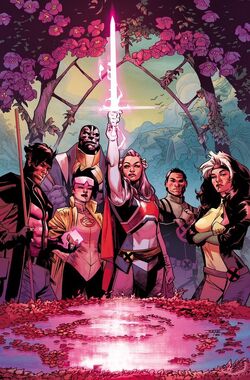 The Excalibur are a government sponsored team of extraordinary individuals with special abilities. They fight for the people of the United Kingdom of Great Britain and Northern Ireland and their interests around the globe. Lead by Captain Britain the team is formed from British heroes and members of the X-Men with hopes to continue the teams legacy after the "Mutant Massacre".[4]

Shadowcat and Nightcrawler were recovering under the care of Moira MacTaggert on Muir Island due to their injuries sustained during the "Mutant Massacre". Both were devastated to hear of the supposed deaths of the X-Men during the "Fall of the Mutants". Brian Braddock, brother to the X-Man Psylocke, and his girlfriend Meggan were both similarly devastated.[5]

Meanwhile, Rachel Summers had escaped from Mojoworld, and found herself back on Earth in London, England pursued by Mojo's Warwolves. She was also being hunted by the Technet, sent by Saturnyne. Kitty, Kurt, Brian, and Meggan helped Rachel defeat both groups of her attackers, and afterward decided to form a new superhero team to continue the legacy of the X-Men. Naming the team "Excalibur" after the magical sword of King Arthur, they set up their headquarters in Brian Braddock's lighthouse.[5]

The team would go on to face a rematch with the Warwolves,[6] as well as battle the Juggernaut,[7] Arcade, the Crazy Gang,[8] and their alternate reality counterparts, the Lightning Force.[9]

For a time, Excalibur travelled between parallel Earths in a locomotive powered by an other-dimensional dragon along with Alistaire Stuart in what became known as the Cross-Time Caper, before eventually returning to Earth-616.[10][11]

It was eventually revealed that Roma had arranged events so that the team would assemble in order to defeat the threat of Necrom, who coveted the Phoenix Force within Rachel Summers. With the help of the rest of the team, Rachel defeated Necrom. Around this time the team were joined by new recruits Kylun, Cerise, and Feron.[12]

The team later travelled to Summers' own Earth, Earth-811, to end the mutant-hating rule of the Sentinels and Ahab.[13]

Excalibur's ranks would grow to include Colossus, Micromax, Pete Wisdom, and Wolfsbane. The team disbanded following the marriage of Captain Britain and Meggan[14] although they reformed briefly to aid Captain Britain in becoming the monarch of Otherworld.[15]

Although the original team disbanded years ago, a new Excalibur team emerged from the "House of M" that enveloped the Earth due to the Scarlet Witch's reality altering powers. Captain Britain again lead the team which included Pete Wisdom, reformed X-Villain Juggernaut, alternate universe daughter of Scarlet Witch and Nightcrawler and former Exile Nocturne, former X-Man and disco star Dazzler, and former X-Man Sage who spied on the Hellfire Club for Charles Xavier as Tessa.[11]

Sage used the most equipment such as highly advanced computers for gathering data and surveillance.

Sage and Wisdom use handguns

Excalibur travelled around in a highly advanced jet. For a time, they travelled in a train equipped for travel between different parallel Earths.

Like this? Let us know!
Retrieved from "https://marvel.fandom.com/wiki/Excalibur_(Earth-616)?oldid=6438683"
Community content is available under CC-BY-SA unless otherwise noted.