How DARE you place me under guard? Release me at once... or you will answer to the Führer himself!

Rachel Summers awakes from a nightmare in which her baby brother Nathan Summers screams in pain and agony. She immediately changes into her Phoenix form, crashes through several floors of the Excalibur Lighthouse and disappears into the night sky. Her teammates awake and examine the destruction on their headquarter building. In addition, Rachel unknowingly telekinetically changed the molecules of her roomate Kitty's sleeping dress, rearranging it into baby clothing.

Kitty, Nightcrawler, Captain Britain, and Meggan discuss what to do about Rachel. They realize that something must have happened to her baby brother and are afraid that Rachel looses control over her Phoenix powers. During this discussion, Nightcrawler notices that Meggan is dressed in quite sexy underwear which she apparently wears to please Captain Britain - in order to gain his attention. Brian, on the other hand, doesn't seem to notice. Nightcrawler becomes mad about Captain Britain's behavior towards his girlfriend and angrily demands that Excalibur travels to New York to watch over Rachel.

In the meantime, Scotland Yard officer Dai Thomas is summoned to Euston Station for investigation. He meets Alysande and Alistaire Stuart, members of the W.H.O. (Weird Happenings Organization). They tell him about strange events currently happening in New York. Inanimate objects come to life all over Manhattan and the Empire State Building seems to be growing. WHO needs Thomas' assistance in the investigation of another odd event - a weird train appeared out of nowhere in Euston Station. It apparently is a Nazi train of the "Reichrail England", powered by steam produced by a giant dragon (who bears a striking resemblance to Lockheed). W.H.O scientist Alistaire Stuart and Dai Thomas meet the passengers of the train: Moira MacTaggert of Edinburgh University and her body guard Callisto. Both are wearing Nazi insignia and strange costumes. In addition, MacTaggert protests against her detention and announces that her captors will have to answer to the "Führer" himself.

High above in the orbit, Rachel Summers flies to New York, reflecting about her mother Jean Grey and her powers. When she reaches New York, she is startled by the fact that the Empire State seems to be growing and swarming with uncanny creatures. She observes winged demons, swarming on the outside. On a platform on top of the Empire State building, she discovers a woman she immediately recognizes as Jean Grey. Rachel calls out to her, but the woman announces that she is the Goblin Queen and uses a psionic blast to push Rachel away. Rachel falls down and lands on the living surface of the building where she is swallowed.

The remaining Excalibur members are on their way to New York, flying over the Mid-Atlantic. Nightcrawler is carried by Captain Britain, while Meggan carries Kitty. Kitty feels an urgent desire to visit a toilet and so Excalibur is forced to land on a ship. While Captain Britain talks to the captain, Kitty uses the ship's filthy facilities. The other sailors approach Meggan who feels flattered by their sympathy and lust. Captain Britain doesn't seem to care, but Nightcrawler teleports between the sailors and Meggan and orders them to leave her alone. He and Meggan continue their journey to New York, while Captain Britain follows, now carrying Kitty.

In Manhattan, Rachel tries to free herself from the living wall and the demons guarding her. She eventually bursts free and falls down where she crashes into a bride shop. There she is touched by a mysterious hand.

Excalibur has reached New York and is shocked about the shape and size of the Empire State Building. They decide that Captain Britain and Kitty will scout the streets, while Nightcrawler and Meggan reconnoiter the Empire State building. Suddenly, Meggan begins to change. She drops Nightcrawler who is captured by flying demons, and flys to the top of the tower where she is greeted by N'astirh. He transforms her into the Goblin Princess.

Nightcrawler manages to free himself and jumps down the Empire State Building, followed by demons. He jumps from demon back to demon back until he crashes into the ground, right in front of the bride shop. His body is hurting inside and out and he cannot move. In the shop window, Rachel has changed into a grinning, stock-still mannequin, dressed in a wedding dress.

In Uptown Manhattan, Captain Britain and Kitty encounter an animate, crazy police car which is threatening civilians. Captain Britain destroys the car and is then caught by the Goblin Princess who drags him into a cinema. Kitty follows them into the building and suddenly awakes, lying in the Afghan desert, surrounded by Afghan civilians, wearing designer shades. She herself changed into some kind of Rambo outfit. Suddenly, Captain Britain appears, wearing nothing but army trousers, a red headband, a giant gun, an axe and a sword. He threatens Kitty and announces that he will execute her as a penalty for challenging the Goblin Queen.

Pages from this issue

The Empire State building during the Inferno Event 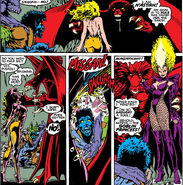 Meggan is transformed into the Goblin Princess by N'astirh 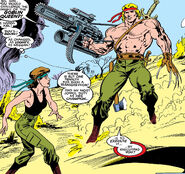 Kitty Pryde is attacked by Brian Braddock
Add a photo to this gallery
Retrieved from "https://marvel.fandom.com/wiki/Excalibur_Vol_1_6?oldid=5614116"
Community content is available under CC-BY-SA unless otherwise noted.