Marvel Database
Register
Don't have an account?
Sign In
Advertisement
in: Dawn of X, Comics, Excalibur Vol 4,
and 122 more
English

View source
watch 02:56
Doctor Strange in The Multiverse o Madness - The Loop
Do you like this video?
Play Sound
Part of the Dawn of X event

5 - Every Mutant Ever Variant

1. "Verse I: The Accolade of Betsy Braddock"

Bets. If you think I'm in danger, if you truly think this is a trap and you still want to fight beside me... there's nothing more noble. I'd be honored to have you. For Avalon.

Appearing in "Verse I: The Accolade of Betsy Braddock"

Synopsis for "Verse I: The Accolade of Betsy Braddock"

Saturnyne attacks the kingdom of Camelot while Arthur Pendragon is missing. Meanwhile, Betsy leaves Braddock Academy for Krakoa. Apocalypse tries to establish the Otherworld gate but Krakoa has been locked out, leading Apocalypse to seek out Betsy.

The Coven Solar Blackwood have their magic taken away by Morgan le Fay. A mutant weed has been growing in the waters of Avalon. Morgan le Fay demands that the Coven finds the source of the weed and restricts all magic from Avalon from mortals until the issue is solved.

Apocalypse asks Rogue to touch the Otherworld gate to dampen some of its magic, so Apocalypse can psychically contact Betsy. Morgan le Fay takes control of Brian with her magic and attacks Betsy. Betsy shatters the Otherworld gate and the weed attaches to Rogue, casting her into deep sleep. Brian gives his amulet to Betsy, which transforms her into Captain Britain.

A NEW DAWN IS FORGED!

The Otherworld is rocked by war! It is a new era for mutantkind as a new Captain Britain holds the amulet, fighting for the Kingdom of Avalon with her Excalibur at her side - Rogue, Gambit, Rictor, Jubilee...and Apocalypse. 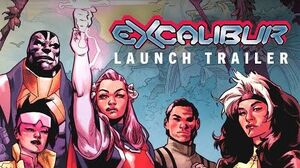