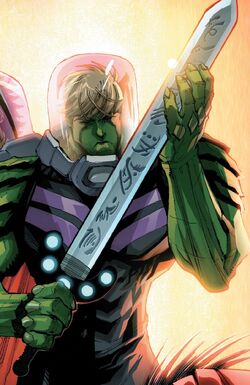 --By the Power of Excelsior!

Excelsior the Star-Sword was a magical blade forged by Dorrek Supreme through the combination of his two ancestral swords from the Kree and from the Skrull.[2]

Excelsior was a magical sword created by the first Kree/Skrull hybrid Dorrek Supreme by merging the two ancestral swords he inherited from his parents, Ryga'a, War-Queen of the Skrulls, and Soh-Larr, the Kree Ultra-Warrior.[2]

After Dorrek Supreme's death, a prophecy involving the sword was created, that whoever managed to pull out Excelsior from the stone it was embedded in, would prove himself as the reincarnation of Dorrek Supreme.[2]

Many generations later, the Knights of the Infinite tested the young hero Hulkling, the first royal Kree/Skrull hybrid to be born in thousands of years, to see if he was destined to rule them. Hulkling easily pulled off the sword, and he was deemed king of the Knights.[4]

The sword was used by Hulkling to defeat the evil wizard Moridun the Mage, and Dorrek kept it even after leaving the Knights.[2] Hulkling has continued to use the sword during missions including defeating Celestial Destructor,[5] vanishing Paibok and the New Revengers,[6] and battling Dark Elves during the War of the Realms.[7]

Excelsior has potent magical powers being an amalgam of two mystical swords of Kree and Skrull origins. As it stands all of its supposed abilities are vague but the few to name off are as follows:

Like this? Let us know!
Retrieved from "https://marvel.fandom.com/wiki/Excelsior_(Star-Sword)?oldid=6508235"
Community content is available under CC-BY-SA unless otherwise noted.