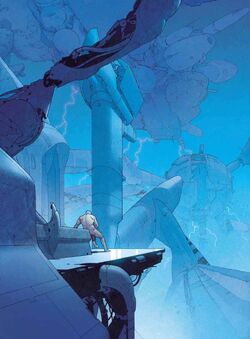 The Exclusion, located "between six artificial molecules" beneath the South Pole in Antarctica, is a key location for the Eternals. It serves two functions for the Eternals; firstly, it is where they are resurrected when they die. Secondly, the Exclusion also serves as a prison for those Eternals deemed to have erred so greatly that they themselves are considered mistakes.[2]

Soon after Ikaris was resurrected and Sprite was released, the wardens of the Exclusion were slaughtered and the Machines of Resurrection destroyed.[3]

Like this? Let us know!
Retrieved from "https://marvel.fandom.com/wiki/Exclusion?oldid=6559966"
Community content is available under CC-BY-SA unless otherwise noted.