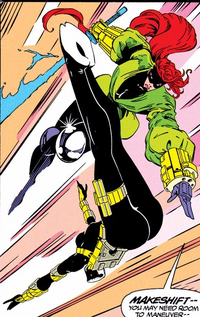 The Executive Elite was a mercenary organization formed by mutant cyberpath Garabed Bushur. The members of the organization were Bashur as Commcast, blade artist Rive, who wielded an energy sword and wore wrist-mounted spikes, and the last member of the group was techno-construct assembler Makeshift, who could rapidly create technology advanced weapons. With his knowledge of cloning, Bashur made copies of himself and his teammates, but a problem with the process ultimately prevented further duplication, leaving him one last ancillary body. When Nyko Halfghanaghan sought revenge for the apparent murder of his brother Pico, he tasked the Courier with hiring the Executive Elite to eliminate the three main suspects on his list; mercenary Deadpool, mutant soldier Cable, and mutant shape-shifter Copycat. As payment, they were offered information on the will of arms dealer Tolliver, which was to lead to a hidden cache of advanced technology. Realizing that they needed the information that the Elite had, Deadpool and his associate Weasel lured the Elite into the open by making Deadpool a target; clones of Bashur and his teammates ambushed Deadpool in Sarajevo, where Deadpool was rendered unconscious with a strong electrical charge. They took Deadpool to their mobile base known as "the Edsel," where they sought to learn more about Tolliver's will by using a device to tap into Deadpool's memories; however, Weasel rescued him. Bashur sought to escape, but was killed by Weasel while Deadpool killed Rive and Makeshift; Deadpool and Weasel gained the information they sought[1].

Retrieved from "https://marvel.fandom.com/wiki/Executive_Elite_(Earth-616)?oldid=5546497"
Community content is available under CC-BY-SA unless otherwise noted.