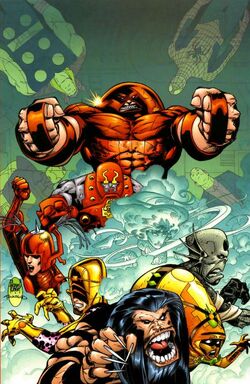 Eight powerful entities made the Wager of the Octessence over who was the most puissant. They each made a mighty artifact that would empower a champion. These champions would divide humanity into 8 groups using a machine. They would then battle, with the remaining champion gaining control of Earth for their master.[1]

Each entity made an artifact:

Eventually each artifact was found and the finder transformed into their avatar:

Cain Marko found the first artifact and became the Juggernaut. But apparently the process was halted when the temple was buried under rubble. Years later, the others formed. This drew the attention of Professor X, Spider-Man, the Avengers, Nova and Loki. Juggernaut was unwilling to go along with the others.[1]

They battled the Avengers on numerous occasions, with Captain America finally being able to convince Bedlam to stop the others. They soon vanished. When Juggernaut returned, he explained that he had defeated the others, but had been weakened by Cytorrak as punishment for his betrayal.[7][8]

Eventually they regrouped, save for Bedlam, to attack Manhattan, where Carnivore was killed by Black Knight.[9]

Retrieved from "https://marvel.fandom.com/wiki/Exemplars_(Earth-616)?oldid=5697737"
Community content is available under CC-BY-SA unless otherwise noted.