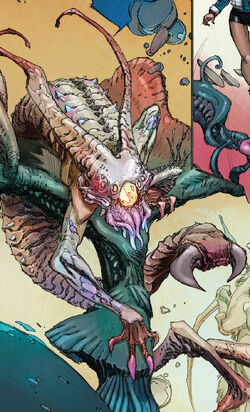 Exo-Parasites are a race of parasitic alien beings that hail from Exo-Space, the negative space between realities. Along with Shoggoths and Viral Parallels, they are the scavengers of the Outer Omniverse, and voracious species that cross between realities and consume their inhabitants.

Ms. America fought a group of those "locals" of the Exo-Space, possibly including Exo-Parasites, when she entered Exo-Space in order to close a rift in space and time.[1]

Like this? Let us know!
Retrieved from "https://marvel.fandom.com/wiki/Exo-Parasites?oldid=6189646"
Community content is available under CC-BY-SA unless otherwise noted.