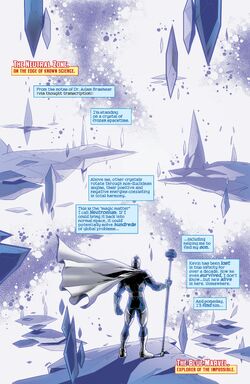 The Exo-Space, also known as the Neutral Zone, is the space found between realities,[4] where negative and positive matter coexist.[5] It is home to Eldritch forms and predatory concepts.[1]

It was discovered by Blue Marvel, who kept exploring it after his son Kevin was left stranded there when the Brashears foiled the plan of a villain to use a portal to the Exo-Space to tear the dimension apart due to the energy feedback.[6] He initially believed the Exo-Space to be merely an alternate dimension.[7]

Adam's other son, Max Brashear also worked in finding a way to rescue Kevin. However, he failed to stabilize the portal and it had to be shut down.[6]

Some time later, Max peacefully reached out his father to work together to free Kevin.[7] They managed to devise a solution, and used it to temporarily bring Kevin, now empowered by the Neutral Zone, to defeat the powerful Beyond Corporation. Kevin's return lasted a few seconds, but Blue Marvel set out to try to reach out again.[8]

The arrival of a mysterious being into the universe caused a breach in the fabric of reality, creating a tear the size of a planet which could have potentially torn the galaxy apart if Ms. America of the Ultimates hadn't closed it.[4]

The Sharra-IV, a Shi'ar monitoring station orbiting around and observing the Great K'ythri, a wormhole connected to the Exo-Space, was attacked by Thanos when he used the Exo-Space as his entry point back to existence.[9]

Like this? Let us know!
Retrieved from "https://marvel.fandom.com/wiki/Exo-Space?oldid=6190386"
Community content is available under CC-BY-SA unless otherwise noted.