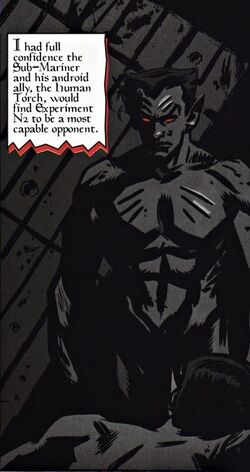 In 1944, Mr. Sinister worked with the Nazis. Attacked in his U-boat by Namor, Sinister was impressed by the hero, and was able to collect a sample of blood during the battle.[2]

From that sample, he was able to create Experiment N2, a clone of Namor, "saving" selected people from the camps and using their blood to give life to his creation.[2]

The camps and his laboratory were soon attacked by the Invaders Namor and the Human Torch, and Sinister intended to dispatch Experiment N2 on the field, which N2 choose to do by himself, freeing himself.[2]

He was able to take down both the atlantean and the android but, much to Sinister's surprise, was defeated by the "powerless" Captain America.[2]

It is unknown if Captain America killed him and, if not, what was his fate.

Human/Atlantean Physiology: The N2 clone was a replica of Namor with powers close from his, including at least:

He also displayed some uncommon abilities

Expert Combatant: The N2 Clone was "well-prepared" to take down the Invaders, except for Captain America.

Experiment N2 was able to outmatch Namor,[2] possibly due to the surprise and training.

Like this? Let us know!
Retrieved from "https://marvel.fandom.com/wiki/Experiment_N2_(Earth-616)?oldid=6442936"
Community content is available under CC-BY-SA unless otherwise noted.