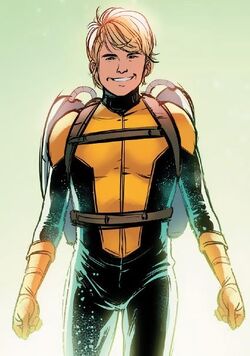 Explodey Boy was one of the 16 million mutants who died on Genosha. He was later brought back to life through Krakoa's resurrection protocols.

At another point in time, the Scarlet Witch attempted to revive the 16 million, most of whom had not yet been revived on Krakoa. Somehow, these 16 million returned to life but had zombie-like characteristics. Since Explodey Boy’s original body was among the dead on Genosha, a zombie duplicate of his was also among those revived.

During the Cotati invasion, the zombie duplicate of Explodey Boy was the first to inform the invading Cotati soldiers what part of the world they landed on and also informed them about mutants; this explanation was followed by him giving them a display of his explosive powers. Not long after which his fellow resurrected mutants swarmed in to attack the Cotati.[1] Later in the fight, the alive Explodey Boy arrived through a Krakoan gateway on Genosha. He had a brief conversation with his zombie self, explaining how he was able to move on with his life since his ressurection on Krakoa. After their brief exchange, his zombie duplicate decided to sacrifice himself to save everyone, while the alive version returned to Krakoa.[2] He later joined the newly reformed X-Men in Otherworld defending Krakoa from the hoards of Amenth.[3]

Like this? Let us know!
Retrieved from "https://marvel.fandom.com/wiki/Explodey_Boy_(Earth-616)?oldid=6472103"
Community content is available under CC-BY-SA unless otherwise noted.