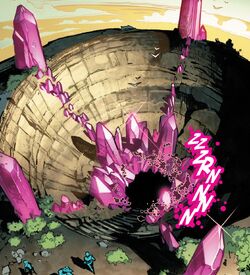 I have built the External Gate. Constructed it on the bones of immortal mutants... Just as planned. Just as required.

The External Gate was a large Krakoan gateway between Krakoa and Otherworld. The Earth side was located in the Eternal Caldera on Arak Coral of Krakoa, while the Otherworld side opened beneath the Starlight Citadel.[1][2][3]

In his efforts to recover Arakko and his family, Apocalypse called a meeting of the Externals inside the Eternal Caldera on the Arak Coral of Krakoa. Thanks to Rictor, Apocalypse had murdered Crule, Saul, Nicodemus and Candra, and with the aid of Selene, Gideon and Absalom sacrificed their corpse to create the Krakoan side of the External Gate. With Excalibur planting the partner Gateway in Otherworld, Apocalypse successfully secured the large gate connecting Krakoa and Otherworld.[1]

Leading a small team of volunteers, Apocalypse and Summoner lead Rictor, Rockslide, Beast, Angel, Siryn, Havok, Polaris, and M through the External Gate to Otherworld where they were almost immediately ambushed by the First Horsemen.[3]

After making the First Horsemen and Krakoan agree to a ten on ten sword battle, Opal Luna Saturnyne closed the External Gate. Additionally, with the resurrection protocols under threat, the Quiet Council ordered a stop to all travel from Krakoa to Otherworld.[4]

Like this? Let us know!
Retrieved from "https://marvel.fandom.com/wiki/External_Gate?oldid=5990630"
Community content is available under CC-BY-SA unless otherwise noted.