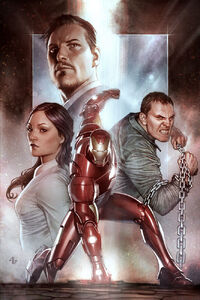 Three men enter the D.R. Cole Slaughterhouse. Two of them turn and inject their partner with a mysterious chemical called Extremis. The man falls to the floor in immense pain – a bizarre physical change slowly overtaking him.

At Stark Industries, Tony Stark meets with controversial documentary film producer John Pillinger. He agrees to discuss many of SI's past involvement in the weapons industry. Tony reveals to John his involvement in the development of seedpod "cluster" bombs that were used against Al-Qaeda rebels in Afghanistan prior to the first Gulf War. It was during an inspection tour that one of Stark's own bombs detonated, sending a piece of shrapnel into his chest, nearly killing him. By the end of the interview it is clear that Pillinger is trying to paint Stark as some kind of war monger.

Later, Stark receives a message from an old girlfriend, Maya Hansen. Hansen tells Tony that something bad has been happening at FuturePharm. Tony dons his Iron Man armor and flies out to meet with her.

Meanwhile, the man who had been injected with Extremis continues to mutate.

Tony Stark is on board his jet en route to a meeting with Maya. During the journey he gets into a debate with his executives concerning revenue and the marketability of their new, highly advanced, cell phone.

Arriving at FuturePharm, Maya tells him everything that has happened concerning the theft of the Extremis project. The Extremis project involves bioelectric robotics and is intended to be a modern day version of the Super Soldier Serum. To alleviate Maya's distress, Tony recommends visiting an old friend named Sal.

Sal is an aging hippie who bears a striking resemblance to Jerry Garcia and lives by himself in a cabin in the woods. The two drink fresh apple juice and discuss the philosophy of technology.

Meanwhile, Mallen, the terrorist who was injected with the Extremis compound, fully develops his powers. He walks into the FBI Headquarters in Texas and begins mercilessly slaughtering everyone he can find. Bullets are ineffective against him and he appears to have super strength, as well as the ability to breathe flame.

A phone call is made to Maya Hansen who turns on the news. She knows that the maniac terrorizing the FBI building is a product of Extremis.

Tony and Maya are on board Stark's jet. He asks her to divulge full details concerning the Extremis project. Maya tells him that Extremis basically re-writes a subject's DNA, improving on the physical specimen as a whole and eradicating all elements that would cause entropic decay. As a result the subject develops super powers. It had never been tested on a live human subject – until Mallen.

Tony later parts from Maya and switches into his Iron Man armor. He tracks Mallen's movements to a van cruising along the interstate. He sets his repulsors at 40% and shears the van in half. He then lands and instructs Mallen to surrender – but Mallen advances. Iron Man blasts him directly with the repulsors, but this proves ineffective. Mallen grabs Tony's gauntlet crushing it in his bare hands. He then throws Iron Man into a car. Iron Man comes back, but Mallen punches him full in the chest and pierces the chest plate armor. Iron Man stumbles backwards as Mallen lifts a car, ready to finish him off.

Iron Man fires his chest laser blasting Mallen backwards. He then uses the last of his power reserves to catch the car that Mallen was prepared to smash on top of him. Mallen flees, and races off across the desert at 300 miles per hour. Tony contacts Maya and has her contacts airlift him to FuturePharm Complex.

Inside of a special medical bay, Maya begins slowly removing Iron Man's armor so that she can treat his internal injuries. Naturally, she learns that Iron Man is actually Tony Stark. Tony's injuries are severe. He realizes that the only way for him to survive is if Maya injects him with the Extremis serum. Maya is reluctant to do so, as she is afraid of what side effects may develop. Tony has little choice however, as he requires the genetic rewriting that Extremis will provide or he will die from the internal damage. Maya injects him with the serum and Tony begins going into convulsions. After several minutes, his body stops moving. Tony appears to be dead!

A cocoon of scabs grows around Tony's body while the Extremis virus rewrites his DNA at an accelerated rate. During this period of convalescence Tony begins having flashbacks from when he first became Iron Man.

He had been inspecting the field tests of his new cluster bomb mines in Afghanistan, when one malfunctioned sending a piece of shrapnel into his chest. Afghani terrorists captured him and locked him inside a camp with another prisoner, Dr. Ho Yinsen. Stark and Yinsen managed to cobble together a chest plate, which acts as a magnetic field preventing the shrapnel from moving closer to his heart. Along with the chest plate, Tony created supplementary armaments and completed construction on what would be the first of many Iron Man armors. Iron Man fights his way out of the enemy camp, blasting dozens of terrorists with his repulsor rays. Yinsen is mortally wounded helping Tony escape and dies inside the camp.

Tony Awakens on the FuturePharm Complex lab table and emerges from the cocoon. The Extremis process has taken effect and Tony is now a cyborg. The Iron Man armor's undersheath has been super-compressed and stored in the hollows of his bones. Upon mental command, he can summon the sheath to grow around him from inside his body. With this, he can hijack any electronic system, including cell phones, computer systems and even remote satellites. On top of this, the Extremis process has completely restructured his genetic code, regrowing organs, healing old wounds and making him stronger than he has ever been before. Donning the outer components of the Iron Man armor, Tony is now ready to take on Mallen.

Tapping into the Stark Industries satellite cluster, Iron Man uses a GPS to home in on Mallen's location. Mallen is heading towards Washington, D.C. to use his new powers to terrorize the city. Iron Man zeroes in on him and blasts him from the sky with his repulsors. He then throws a car at him, but Mallen tears it out of the sky with his own bio-repulsors. Iron Man lands on the ground and punches Mallen through a wall. He then delivers a swift kick to his jaw, knocking him through the wall of an office building.

Mallen produces an electric charge from his hand and aims it at Iron Man, but Tony's newly enhanced reflexes allow him to easily avoid the attack. Tony burns a hole into the floor and pulls up some electric cables. He shoves the live wires into Mallen's chest producing a charge which sends the foe spiralling across the street.

Iron Man follows him outside and they resume their fight at a construction site. Tony finds a nearby bulldozer, rips loose the shovel, and begins bashing Mallen across the head with it. The psychotic terrorist leaps on him and begins sending bolts of electricity into Iron Man's throat. Tony has no choice, but to act in self-defense and activates his uni-beam. The beam blasts a hole through Mallen's chest. Grabbing the villain's head, Tony lets loose with both repulsors, decapitating his adversary. Angry over the choices he has been forced to make, Iron Man begins violently kicking Mallen's headless corpse. Now, there is only thing left to do.

He flies back to Futurepharm with a squad of army soldiers. He now realizes that Aldrich Killian could not have been working alone when he stole the Extremis technology from FuturePharm, as two people were required to access the vault. The other person was of course Maya Hansen. Maya confesses to allowing Extremis to get into terrorist hands, because she knew that it would convince defense contractors to renew FuturePharm's funding. She was immediately arrested and taken to prison.

Retrieved from "https://marvel.fandom.com/wiki/Extremis_(Story_Arc)?oldid=5123437"
Community content is available under CC-BY-SA unless otherwise noted.