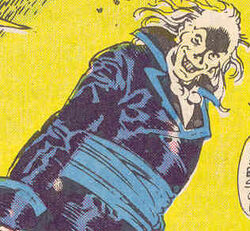 Captain F.R. Crozier was doctor and chief science officer on a doomed arctic expedition hundreds of years ago. The ships had become frozen in the ice pack, and after his captain did not return with the half of the crew he took to search for help, Crozier was forced to lead the remaining crew in the search for escape from the vicious winter. Not wanting to die, he ingested a formula which would place him in suspended animation until the summer thawed him. What he didn't account for was the loyalty of his crew. They gave him a proper burial, thus denying him of the sunlight he would need to awaken.[1]

Crozier remained in suspended animation (apparently conscious of the passage of time) until Alpha Flight came to his grave believing it to be a suitable place of power for Narya to give birth to her son. Crozier's conscious was able to take control of the baby. He gained the ability to control the forces of death and decay and fought Alpha until he retreated.[2]

Alpha Flight once again met up with Pestilence where they discovered that the baby's innocence was destroying him. He used his powers to control Snowbird and to destroy the body, thus freeing his spirit. Vindicator upon realizing what was going on, was forced to slay Snowbird, only to discover she was too late, Pestilence was free of a mortal form.[3]

Shortly after Snowbird's funeral, her body, still in Sasquatch form, rose up and attacked Alpha Flight. it was revealed that Pestilence had found himself a new body. It was only though the intervention of Walter Langkowski that Pestilence was forced out of Narya's body. Heather threw Shaman's Medicine Pouch and Pestilence was sucked into it.[4]

Pestilence was capable of controlling and manipulating the forces of death and decay. While in control of Narya's son's body, he could change his shape. When he possessed Narya's body (in Sasquatch form), he had super-human strength.

Like this? Let us know!
Retrieved from "https://marvel.fandom.com/wiki/F.R._Crozier_(Earth-616)?oldid=5869175"
Community content is available under CC-BY-SA unless otherwise noted.