For fictional versions of Fabian Nicieza as a character within comic books and/or other media,
visit this disambiguation page.
Fabian Nicieza 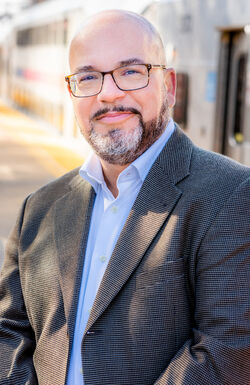 He is the brother of writer Mariano Nicieza.

When Nicieza was three years old his family moved to the United States. Growing up in New Jersey, Nicieza learned to read and write from comic books. Later he studied at Rutgers University, interning at ABC Television before graduating in 1983 with a degree in Advertising and Public Relations. Then from 1983 - 1985 he worked for the Berkley Publishing Group, first in their production department, then as a managing editor.

In 1985 Nicieza joined the staff at Marvel Comics, initially as a manufacturing assistant, later moving over to the advertising department into a manager position. During this period he began to take his first freelance work for Marvel, writing short articles for Marvel's promotional magazine Marvel Age.

Nicieza's first published comic story came in 1987 with Psi-Force #9, a title in Marvel's short-lived New Universe line. This led to his becoming that title's regular writer at issue #16, which continued until its cancellation at #32 in early 1989.

This work led to some small fill in work for the writer on titles such as Classic X-Men and in the Marvel Annuals' 1989 summer crossover Atlantis Attacks. Then in 1990 in the pages of Thor #412, Marvel's then-Editor-in-Chief Tom DeFalco created the super-hero team New Warriors (using pre-existing characters) and decided to give his new creations their own comic book. Nicieza was selected as writer of the project with artist Mark Bagley on pencils. He went on to write the book for most of its first 50 issues (initially with Bagley as artist, then with Darick Robertson and occasional fill-ins) to general critical and fan acclaim.

Also in 1990 Nicieza began short runs on comics such as Alpha Flight (vol.1 #'s 87-90), Avengers (Vol.1 #317 -325) and Avengers Spotlight, as well as the miniseries Nomad, which in turn led him to write the ongoing Nomad (vol.2) series in 1992. That same year, Nicieza became editor for Marvel's comics line for young children - Star Comics. His time as editor was short, however, as he soon quit to concentrate on his burgeoning freelance writing career at the company.

Projects which Nicieza took on in this period included the National Football League-approved super-hero NFL Superpro (1991), and the ambitious miniseries The Adventures of Captain America, Sentinel of Liberty (1991), in which Nicieza (with artist Kevin Maguire) retold and reimagined Captain America's 1940s origin.

In 1991 Nicieza joined with artist Rob Liefeld in co-plotting and writing the final issues of the New Mutants title (vol.1 #'s 98-100). In those issues Liefeld and Nicieza created some key characters and concepts including Deadpool, Shatterstar and X-Force. Liefeld and Nicieza then produced an ongoing X-Force title, the first issue of which set sales records in the summer of 1991 (though it was quickly surpassed by X-Men vol.2 #1 later that year). Nicieza initially worked on the title as scripter; after the departure of Liefeld in #12 he became its full writer which he remained until 1995.

Nicieza had been offered writing duties on Uncanny X-Men in early 1992 but refused citing his heavy schedule, the work eventually going to Scott Lobdell at Nicieza's suggestion. However by the end of that year Nicieza has been convinced to come aboard the adjectiveless X-Men title beginning with #12, working with artist Andy Kubert throughout his run. For the next three years Nicieza, Lobdell (still on Uncanny X-Men) and editor Bob Harras steered the fortunes of Marvel's most successful characters through stories such as the X-Cutioner's Song, Phalanx Covenant and Age of Apocalypse crossovers.

During this period Nicieza wrote the first (1992) Cable mini-series as well as the first few issues of the character's ongoing (1993) Cable Series. He also wrote the first solo Deadpool series, Deadpool: the Circle Chase in 1993. These series expanded the characters' personalities and established key background information for both characters, all things which were later used by other writers on those characters' subsequent ongoing books.

However in 1995, in a dispute with Harras over the future direction of his plotlines on X-Force, Nicieza quit the X-titles completely leaving X-Force with #43 and X-Men with #45.

After 1995, Nicieza's workload at Marvel began to fall dramatically. He wrote short runs of Captain Marvel (vol.2, 1995), Spider-Man: The Final Adventure (1995) and Mighty Morphin Power Rangers before leaving the company entirely in 1996. That year Nicieza did his first work for rival publisher DC Comics, co-writing Justice League: Midsummer Nightmare with Mark Waid which relaunched the Justice League as the JLA. He also worked for Twist and Shout Comics writing and penciling back-up stories in X-Flies Special #1 and Dirtbag #7.

Later in 1996 Nicieza joined Acclaim Comics as senior vice-president and editor-in-chief. He was charged with revamping the companies intellectual properties which had previously formed Valiant Comics Valiant Universe. Nicieza as editor oversaw the new version, dubbed "VH2", which re-imagined characters such as Solar, X-O Manowar and Ninjak using popular comic book writers of the period including Warren Ellis, Mark Waid and Kurt Busiek.

Nicieza himself wrote the re-imagined Turok title as well as a new concept, Troublemakers. Turok met with success as a video game adaptation, and Nicieza was promoted to President and Publisher of Acclaim Comics, Inc. in 1997. Nicieza even wrote a Turok novella during this period. However his success was short lived and after staff cuts and most of the lines' cancellation, Nicieza left Acclaim in 1999.

Also in 1999 Nicieza took over the writing chores on Marvel's Thunderbolts with #34, following the departure of Kurt Busiek. He continued to write the book (initially with old partner Mark Bagley on art, later with Patrick Zircher and Chris Batista) up until #75 when the title was revamped. The revamp was unsuccessful however and in 2004 the original version of the team was resurrected, initially in an Avengers/Thunderbolts miniseries, then later in the New Thunderbolts ongoing series with Nicieza again as writer and with Tom Grummett as penciller.

Since 1999 Nicieza has taken on many writing projects, mostly for Marvel. These include limited series such as Citizen V (2001), Citizen V and the V Battalion: Everlasting (2002), X-Men Forever (2001), and X-Force (Vol.2) as well as short-lived ongoing series such as Hawkeye (2003). At DC he has written the six issue mini-series Supermen of America (1999) and JLA: Created Equal (2000) as well as some issues of Justice League Adventures.

In 2003 Nicieza branched out by co-creating with artist Steffano Raffaele a horror tinged, creator-owned mini-series The Blackburne Covenant which was published by Dark Horse Comics. That same year he also returned to two characters he had first written over ten years before, in the new ongoing Cable & Deadpool series for Marvel.

2006 saw the Nicieza-orchestrated mini-series "I Heart Marvel Vol 1" hit stands around Valentine's Day. He penned one issue of the mini, which featured 3 characters from his old New Warriors series.

As a screenwriter, Fabian was a co-writer of the Hot Wheels World Race animated feature (with Mark Edens and Jeff Gomez), and The Black Belt Club (with Jeff Gomez and Dawn Barnes), a computer-animated feature based on the bestselling book series from Scholastic in development with Starlight Runner Entertainment.

In 2006 Nicieza's returned to DC with a three issue arc in Superman #841-843 (September - November, 2006), co-written with Kurt Busiek. This arc spotlights Nightwing, Firestorm, and The Teen Titans.

He has received a good deal of recognition for his work, including a nomination for the Comics' Buyer's Guide Award for Favorite Writer in 2000.

Retrieved from "https://marvel.fandom.com/wiki/Fabian_Nicieza?oldid=7025757"
Community content is available under CC-BY-SA unless otherwise noted.