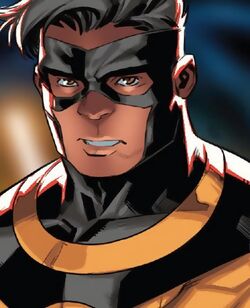 Fabio Medina was one of the numerous new mutants whose powers manifested after the war between the Avengers and X-Men.

His powers manifested after he was a victim of a robbery attempt, as he explained to the police. The San Diego police officers attempted to put him into custody, but they were interrupted by Cyclops and his group of X-Men who showed up at the scene to rescue Fabio.[3]

After the X-Men and Fabio together fended off a squad of various sized Sentinels, the X-Men offered Fabio a place on their team. He was reluctant at first, but eventually determined that he preferred to join rather than to remain in San Diego.[4]

He was with the team of X-Men that visited Eva Bell's home and encountered the Avengers before being transported into Limbo during Dormammu's attempted attack.[5] After they escaped, Fabio demanded to be taken home.[6] His family questioned his disappearance and did not believe or understand that he was a mutant.[7]

He later lost control of his powers and Agent Dazzler of S.H.I.E.L.D. arrived to question him about Cyclops' location. He was taken into S.H.I.E.L.D. custody before being rescued by Cyclops' team, joining them once more. He later assisted in the battle against the Blockbuster Sentinel by concentrating the emission of his gold balls to topple the Sentinel.[8][9] It was upon this occasion that he took on the nickname Goldballs.[2]

Fabio later moved to New York where he attended school with Miles Morales and Ganke Lee at Brooklyn Visions Academy for a while.[10][11]

Fabio moved to the sentient mutant island of Krakoa following the foundation of a sovereign mutant nation in its territory by the hand of Charles Xavier, Magneto, and Moira X. While there, it was discovered that his namesake gold balls were actually biological infertile "eggs," which if made fertile, could allow for potentially unlimited resurrection of the mutant race. As such, he became a member of The Five, who kept the mutant population of Krakoa alive even after death. With the rest of The Five he was considered as something sacred to be treasured because, together, the five mutants were able to actually create new clones of the deceased, restoring their bodies, powers, and memories as they were at the time of their deaths.

Xavier tasked the Five with resurrecting Marvel Girl, Cyclops, Husk, Archangel, Penance, Mystique, Wolverine, and Nightcrawler who died stopping the creation of Nimrod.[12] The Five had previously resurrected other long deceased mutants, such as Banshee, and Sophie and Esme Cuckoo.[13] As a result of the developments surrounding his powers, Fabio changed his codename to Egg.[1]

Fabio is a Mutant whose powers manifest by the production of gold balls of different sizes from any part of his body, emitting the sound "Poink" each time they hit something. The balls seem to be able to bounce.[3]

It was discovered that the "gold balls" Fabio produces are actually infertile eggs. In conjunction with the group known as the Five, Fabio forms a key part of Krakoa's ability to revive dead mutants.[12]

Like this? Let us know!
Retrieved from "https://marvel.fandom.com/wiki/Fabio_Medina_(Earth-616)?oldid=6079193"
Community content is available under CC-BY-SA unless otherwise noted.