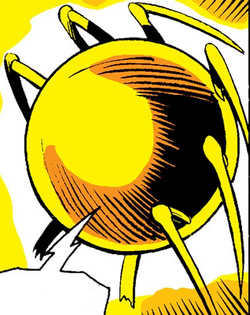 The Faceless One was a member of the Kt'kn, an alien race who sought to conquer the Earth. He allied himself with Prince Rudolfo and the Latverian underground in their coup against Doctor Doom, hoping to use Latveria and Doom's technology in his conquest. He discovered the original Doomsman and went to confront Doom. However, Doom was able to regain control of Doomsman and turned him against Faceless One who escaped his android body and detonated it. In the confusion the Faceless one escaped and made it appear like he had escaped in his Omni-Sphere when in reality he was attempting to use Doom's defenses against him. He was defeated when Doom destroyed his own castle. [1]

He retreated to the caves below Latveria, and recreated his android body an recruited several robots and led them on a revolt. Luke Cage was hired by Doctor Doom to defeat some that had escaped to New York but when Doom failed to pay he travelled to Latveria to get his dues. Here he joined the Faceless One in his revolt solely to get the money, during the fight Cage damaged Doom's armor sufficiently that Faceless one attempted to slay Doom. However, Cage did not want to be involved in a murder so destroyed the Faceless Ones exoskeleton and his detached head fled. [2]

The Faceless one then took over the Drydock, which was the Space Station of the 30th Century Guardians of the Galaxy. He also captured astronaut Salia Petrie and used her to also capture Ms. Marvel. Teleporting them both aboard the ship he attempted to control Ms. Marvel, however she broke free and met up with Vance Astro. The two proceeded to try and separate the Faceless One from his android body, but in the process he Injected Ms. Marvel with a paralysing toxin from his legs. Vance destroyed the android body before it could attack her and The Faceless One teleported away. [3]

Like this? Let us know!
Retrieved from "https://marvel.fandom.com/wiki/Faceless_One_(Earth-616)?oldid=6467442"
Community content is available under CC-BY-SA unless otherwise noted.