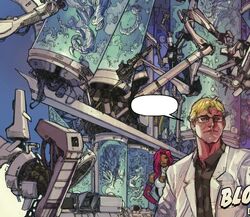 The Facility I work for is a business, Miss Kincaid. We provide our clients with weapons. In fact, your friend X-23 is one of our best creations. Our current client wanted us to create a very specific item, to do a very specific job. He left it to us as to how to proceed.

After the Weapons Plus Project was shut down, the Facility was created as a branched-off organization with similar goals of creating genetically altered weapons and soldiers.

Under the direction of Adam Harkins this organization created Kimura; X-23 (a daughter to Wolverine after failing 22 times to clone him);[1] created several mutant-hunting Predator X monsters;[2][3] and numerous other genetically engineered weapons.[citation needed]

Adam Harkins utilized a red lab in Canada to use the stolen wings from Angel to create the Choir, an army of winged warriors, for Matthew Risman's Purifiers.[4]

Returning from the future, X-23 was kidnapped by soldiers of H.A.M.M.E.R. who were revealed to be Facility agents, with the exception of Alisande Morales. When Kimura was torturing X, Morales helped her to escape.[citation needed]

X-23 used Trigger 42 on herself to make her a savage killer, and slaughtered many agents of the Facility before being extracted by X-Force. In the ensuing chaos Kimura killed Harkins because he annoyed her, and blamed X-23.[citation needed]

Like this? Let us know!
Retrieved from "https://marvel.fandom.com/wiki/Facility_(Earth-616)?oldid=6484406"
Community content is available under CC-BY-SA unless otherwise noted.