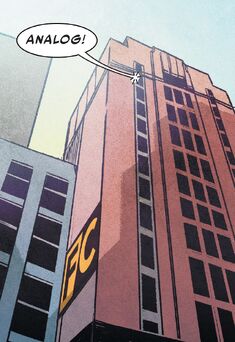 The Fact Channel is a news channel in New York City. Following Mayor Jameson's resignation, the Fact Channel asked him to came to the Fact Channel Studios. Thinking it was a televised interview, he went on the defensive and said he would not apologize about anything he'd done as a mayor. However, the reporter revealed they wanted to offer him a job as an on-air personality. Jonah accepted, saying that "the medium of television [had] finally justified its existence".[1]

Jameson's first night on the air didn't go as planned. He was bumped from the first segment due to a conflict of interest, since the subject of the report was Parker Industries. An assault by Black Cat and Electro led to a fight between the two villains, Spider-Man, and Silk. Jonah insisted that the cameras keep rolling, excited to be broadcasting exclusive footage of the conflict as it unfolded right in their studio.[2]

But Jameson's own ego soon proved to be his undoing. The battle culminated in Black Cat pinning Spidey down and removing his mask, attempting to reveal his identity to the world. Her plain failed, though, due to a grandstanding Jonah accidentally blocking the shot.[3]

Little time later, they opened an internship spot and, within an hour, Cindy Moon appeared to apply for the position.[3]

When a new biotech company named New U Technologies appeared, claiming they could resurrect the dead and cure any decease, Dr. Rita Clarkson met with J. Jonah Jameson and, to prove there was no limits to what New U could do, they introduced him to his reanimated wife, Dr. Marla Madison-Jameson,[4] who prompted her husband to use his position at the Fact Channel News to promote New U Technologies.[5]

Jonah travelled to San Francisco, where New U Headquarters was located, to see his beloved wife, but the New U ended up being a fraud, cloning its patients, instead of curing them.[6] Things then went from bad to worse, as Doc Ock set off a signal emitting the frequency responsible for clone decay and piped it throughout the base, turning every clone into Carrions. Ben Reilly, who was secretly behind the company, decided to broadcast the decaying signal across the entire world, via Fact Channel News, causing an outbreak of the Carrion Virus globally.[7]

Despite the complicacy, Spider-Man managed to stop the decaying worldwide and save the world[8] but Jonah was fired and Cindy quit.[9]

Retrieved from "https://marvel.fandom.com/wiki/Fact_Channel_News_(Earth-616)?oldid=5280691"
Community content is available under CC-BY-SA unless otherwise noted.