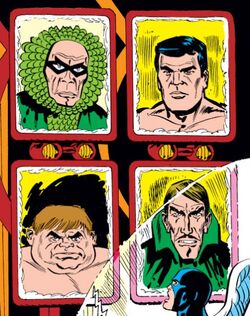 The powerful, criminal, secret organization Factor Three sent agents Ogre and the mind-controlled Banshee after the X-Men in an attempt to kidnap Professor X. Freeing Banshee from Factor Three's control, the X-Men easily defeated Ogre and foiled the plot.[1]

When Banshee attempted to contact the X-Men after learning of Factor Three's European headquarters, his message was interrupted, leading to the X-Men briefly battling Spider Man, mistakenly believing the Wall-Crawler was a member of Factor Three.[4]

Arriving in Europe, the X-Men were quickly captured by Factor Three, whose membership included the Vanisher, Blob, Unus the Untouchable, and Mastermind as well as two new villains: the Changeling and Mutant Master. The group found the X-Men "guilty" of betraying mutantkind and sentenced them to death. Before executing the X-Men, Factor Three revealed that they intended to initiate World War III by attacking both the United States and Russia, sparking a nuclear exchange between the two.[5] The X-Men split into two, foiling both plots[6] and confronted Mutant Master at his headquarters in the United States.[7]

There, with the aid of the Changeling, they freed the Professor. Mutant Master was revealed as a member of the alien race, Siris. The X-Men and Factor Three worked together to stop Mutant Master and parted peacefully but vowed to meet again as enemies.[7]

Like this? Let us know!
Retrieved from "https://marvel.fandom.com/wiki/Factor_Three_(Earth-616)?oldid=5756398"
Community content is available under CC-BY-SA unless otherwise noted.