Marvel Database
Register
Don't have an account?
Sign In
Advertisement
in: Events, Earth-616, Fall of the Mutants, X-Men Events

Fall of the Mutants

Fall of the Mutants 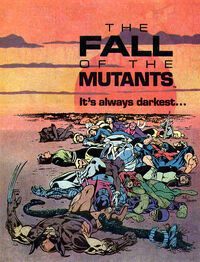 Official Name
Fall of the Mutants

The event dealt (at least in small part) with the general public's perception of mutants as dangerous criminals with no regard for the law, and the proposal of a "Mutant Registration Act", in which mutants would be forced to register themselves with the government, as one would register a deadly weapon.

The X-Men head to Dallas in search of Storm, last seen there. Upon arrival, they encounter Freedom Force, and a battle begins.[1] However, once it begins snowing (in the middle of summer) and cavemen, demons, and other strange creatures begin appearing, the two teams realize something serious is going on, and decide to put aside their differences for the moment.

Meanwhile, Storm and Forge (whom she'd gone to see) both find themselves in a beautiful, pristine other-worldly dimension. Time passed differently here, so they spend a year together, while only a few moments pass on earth. There, they find love again, and Forge finds a way to use his bionic arm and leg to restore Storm's lost powers and get them both back to Dallas.[2]

Back on Earth, the X-Men and Freedom Force begin to unravel the truth behind the strange events around them. It turns out that during his stint in the Vietnam War, Forge had used his shaman powers to summon a demon to avenge his fallen comrades. However, in his naiveté, he didn't realize that the spell required the souls of his nine comrades, and unleashed a horde of demons he had no way to control, including the Adversary, the creature responsible for the chaos they now found themselves in.[3]

As Storm and Forge join the battle, it quickly becomes apparent that the Adversary cannot be defeated, and the only way to be rid of him is for Forge to cast the same spell and seal him away forever. So, with millions watching on TV, Forge casts the spell, using the souls of the X-Men to fuel it. However, the goddess Roma, who'd also become embroiled in the day's events, takes pity on the X-Men for their noble sacrifice and returns them all to life, additionally commenting to them as foul and evil as the Adversary is, he should not and cannot be locked away forever, since from the chaos he creates, positive change and growth occurs. However he was bound for an age, which Roma decreed was sufficient punishment for his crime. She had additionally made the X-Men invisible to all forms of surveillance save plain sight, thus allowing them to continue on with their operations while the world assumes they are dead. Before they head to Australia to establish a new base, she gives them the Siege Perilous, telling them they could use it to 'reset' time should they be discovered.[3]

The story begins with the team being transported to the airship of the villain Apocalypse. He offers to let them join him in his war against humans (with the purpose of spurring evolutionary growth) which they, of course, refuse. He has his henchmen (named after the biblical Four Horsemen of Apocalypse) attack them and, after a pitched battle, the horseman Death reveals himself to be their former comrade Angel, now transformed into Archangel. He quickly defeats the team and they are restrained, save for Caliban, who surrenders himself to Apocalypse in return for powers like Archangel's.[4]

Apocalypse then unleashes his Horsemen on New York City and tries to force the heroes to watch. They are able to break free of their restraints, though, and attempt to stop the Horseman. In the process, they accidentally cause Apocalypse's airship to lose control, damaging several skyscrapers as it loses altitude. The superhero team Power Pack helps limit the damage, destroying part of the airship's engine cowling just before the cowling would have impacted the Statue of Liberty. As the team battles the Horsemen, Iceman comes up with an idea to stop Archangel, and quickly creates a statue of himself out of ice. Archangel attacks and breaks the statue and, thinking it is actually Iceman, is overcome with guilt and switches sides. Apocalypse easily repels his attacks, but decides to make a tactical withdrawal anyway. After he leaves, the team quickly attempts to regain control of Apocalypse's airship, eventually bringing it to land on top of their headquarters, crushing it.[5]

As the story opens, the team heads off to visit their friend Bird-Brain on his remote island. There, they quickly discover that Bird-Brain's creator, the Ani-Mator, is creating more semi-sentient creatures (the Ani-Mates), which he mistreats and experiments on.[6] As the team attempts to free them, The Right tracks them down and attacks them. During the three-pronged battle, Cypher is shot and killed, taking a bullet meant for Wolfsbane.[7] Eventually, Bird-Brain defeats the Ani-Mator and becomes king of the Ani-Mates, and Magik teleports The Right's soldiers, along with the Ani-Mator himself, to Limbo. They then return home, where Magneto blames humanity for Cypher's death. Disgusted, the team quits his tutelage, while deciding to stay dedicated to Charles Xavier's dream of peace.[8]

Fall of the Mutants Event: Episodes and Synopses