THE DAWN DOES NOT BREAK FOR ALL!

Psylocke finds herself in this new world of Mutantkind unsure of her place in it… but when a face from her past returns only to be killed, she seeks help from others who feel similar to get vengeance. Cable and X-23 join Kwannon for a personal mission that could jeopardize all Mutantkind! 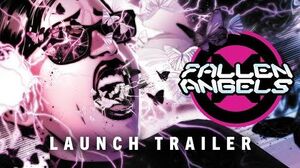 Retrieved from "https://marvel.fandom.com/wiki/Fallen_Angels_Vol_2_1?oldid=7113672"
Community content is available under CC-BY-SA unless otherwise noted.