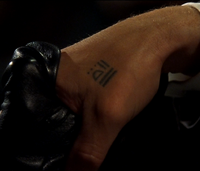 Familiars are vampire wannabe's. They do the bidding of their vampire masters, providing usefulness in the daylight hours when vampires cannot easily operate. Their penetration of human society is extensive, and their numbers are reputed to include everything from lawyers, to police, to high-ranking government officials. One familiar was notably embedded with Blade's vampire hunting operation as a spy.

The motivations for people to become familiars are equally varied. Many are drawn to the prospect of immortality. Others simply desire the wealth and power that comes with being a familiar. Some take a more pragmatic stance and understand that they are nothing more to vampires than food, but use their status as a familiar as a form of protection against other vampires.

Familiars can be identified by their glyph tattoos which illustrate their vampire masters. Typically, these are concealed or visible on the neck where a vampire might see them. Should one vampire kill the familiar of another, he or she will be obligated to compensate the disadvantaged vampire for the inconvenience.[1][2]

Retrieved from "https://marvel.fandom.com/wiki/Familiars_(Earth-26320)?oldid=5126868"
Community content is available under CC-BY-SA unless otherwise noted.