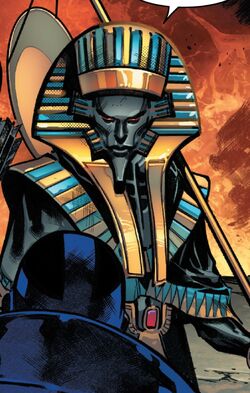 Famine was the first of his name to serve in Apocalypse's Horsemen. He was sealed away on Arakko, alongside his fellow Horsemen.[5] They ended up in the dimension of Amenth which was populated by endless hordes of Daemons. His mother Genesis and the other mutants that were left on Arakko made the island their home and build towers to protect them from the threat of the Daemons.

However, after his mother fell at hands of Amenth's dark god and leader of the Daemons, Annihilation, the Daemons finally managed to destroy Arakko's towers and attack its mutant population. In a last ditch effort to save Arakko, Famine and the surviving mutants send the Summoner to Earth to find his father Apocalypse.[6] However, his mother was actually still alive and combined with Annihilation, which lead to the Daemons and Arakko's forces joining together and decided to invade Krakoa.[7]

After months have passed, Death, alongside his siblings, the other Horsemen, began leading the Daemon armies, and assaulted Otherworld in order to access Krakoa. After reuniting with their father, the Horsemen and Summoner attacked Apocalypse and launched an attack on some members of the X-Men. The fight was broken up by the Omniversal Majestrix Saturnyne who offered each side to participate in the challenge of the Ten of Swords for victory, to which they agreed.[2]

After conquering the Last Watchtower of Del Di'Lorr, the First Horsemen annexed Dryador making it a province of Arakko. With their siblings Death and War actively participating as swordbearers in Saturnyne's tournament of champions, Famine and Pestilence were the current acting regents of the Fiefdom of Amenth.[4]

After Krakoa had won the tournament,[8] Famine and his sister Pestilence joined their mother in the war for Krakoa, but the Swordbearers of Krakoa were then joined by the Green Priestesses, the X-Men, the Captain Britain Corps and the Vescora. The war ended when Apocalypse manage to conquer Annihilation and as a reward for winning the tournament he switched places with Arakko, leaving Apocalypse to finally be reunited with his wife and children and govern Amenth together.[9]

Famine was a mutant with the following powers:

Like this? Let us know!
Retrieved from "https://marvel.fandom.com/wiki/Famine_(First_Horsemen)_(Earth-616)?oldid=6106819"
Community content is available under CC-BY-SA unless otherwise noted.