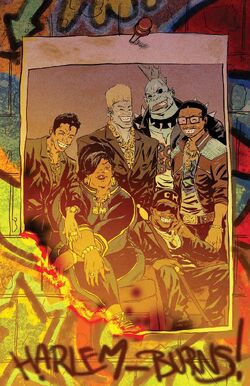 Years ago, shortly after superhumans first started appearing in New York City in the Modern Age, a young Dontrell Hamilton gathered five other young criminals together to form a street gang and increase their personal strength. He was inspired to do so by the supervillain group known as the Sinister Six, which joined forces in order to fight the vigilante known as Spider-Man, their common enemy.

Dontrell meet up with his girlfriend Mariah Dillard, social outcasts Lonnie Lincoln, an albino, and Mortimer Norris, who was deformed, and partners in crime Raymond Jones and Cornell Stokes to form his gang. He believed that if they could come up with a gimmick like super villains had, they could take over crime in Harlem. Lincoln had the idea to fill-in their teeth so they all were fangs. Jones, Stokes and Norris followed him in this idea. In their next meeting, Norris came up with a name and the Fang Gang was born.

However, before the Gang could actually do anything, their temporal alliance fell apart to infighting. Mortimer made advances towards Mariah, causing Dontrell and him to come to blows. Lonnie insulted Mariah’s her weight when he tried to calm Dontrell, causing both of them to leave the gang. The four remaining members of the Fang Gang went their separate ways.[1]

While Dontrell's plans for the Fang Gang never went to fruition, the individual members of the group would all have a part to play in the criminal world of New York City.

Retrieved from "https://marvel.fandom.com/wiki/Fang_Gang_(Earth-616)?oldid=5776397"
Community content is available under CC-BY-SA unless otherwise noted.