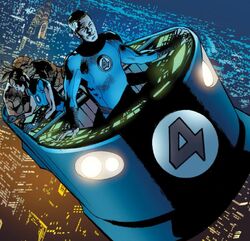 The original Fantasti-Car was the Fantastic Four's first vehicle after they went public as a team of super-powered adventurers. It was affectionately referred to as the Flying Bathtub.

It was used for both missions and everyday life as they used it to return from the Miracle Man's magic show in civilian clothes and then later when they donned their costumes to stop him.[1] It was eventually replaced by the Fantasti-Car MK II.[2]

Many years later the Fantasti-Car MK I fell into Deadpool's possession and was used by Commander Steve Rogers and the Mercs for Money to search Manhattan for Madcap.[3]

The Fantastic Four uses this vehicle for transportation.

In Earth-807128, the Hulk Gang drove around in an old Fantasti-Car on their missions to collect rent in their territories. They'd modified it a bit with green spray paint on the front, featuring sayings like "Dead and 4-Gotten", and "Banners Un-4 Given".[4]

Logan later used this car packed full of C-4 to blow up the Hulk Gang's encampment, killing most of them in the process.[5]

Like this? Let us know!
Retrieved from "https://marvel.fandom.com/wiki/Fantasti-Car_MK_I?oldid=6448615"
Community content is available under CC-BY-SA unless otherwise noted.