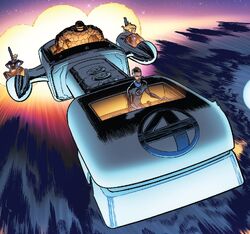 The Fantasti-Car MK II was designed and maintained almost entirely by Johnny Storm and used by the Fantastic Four. It has seen many upgrades and refits over the years. When Dr. Doom took control of the Baxter Building,[2] he used it against the Fantastic Four, destroying it in the process. Reed Richards presumably repaired it afterwards.[citation needed]

The Fantasti-Car is a 27-foot, hybrid, vertical take-off/landing craft combining electric-powered fan lift and jet turbine thrust that yields maximum fuel efficiency. Designed by Reed Richards and Johnny Storm, and constructed out of a variety of foamed alloys and employing early computer-aided manufacturing techniques, the vehicle is highly unorthodox, but air-worthy. [citation needed]

The Fantasti-Car's maximum level flight airspeed is 550 miles per hour with all four members of the Fantastic Four on board. Maximum altitude of 30,000 feet. The twin mini-planes can each detach and fly independently of the mother craft, or by radiocontrol. They are stowed on board with one wing up. The mini-plane are released and captured by an articulated arresting arm that holds them until they are either ready for stowage or flight. Their maximum level-flight airspeed is 350 miles per hour, their normal service ceiling is 38,000 feet.[citation needed]

The Fantastic Four used the Fantasti-Car to rendezvous at the S.H.I.E.L.D. Helicarrier with the rest of the resistance prior to becoming zombies themselves.[3]

The Fantasti-Car resembling it's MK II equivalent was designed by Reed Richards. Like it's comic version the vehicle can separate into four flying

Like this? Let us know!
Retrieved from "https://marvel.fandom.com/wiki/Fantasti-Car_MK_II?oldid=6545565"
Community content is available under CC-BY-SA unless otherwise noted.