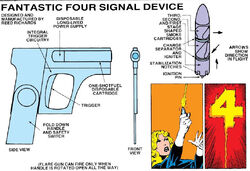 The Fantasti-Flare is a firearm used by the Fantastic Four to alert each other of their respective locations. It launches a fiery “4" into the sky. It was created and first used by Reed Richards to alert the others to return in order to investigate the disappearance of power plants caused by Mole Man.[2] Other members of the Fantastic Four have also appeared to have been given one as the Human Torch has used one when he found where the Skrulls who had been impersonating him,[3] and when Namor set about to destroy the surface world after Johnny removed his ammnesia.[4] The Invisible Girl was hypnotised into using hers to draw the rest of them to the Miracle Man.[5]

Retrieved from "https://marvel.fandom.com/wiki/Fantasti-Flare?oldid=5812952"
Community content is available under CC-BY-SA unless otherwise noted.