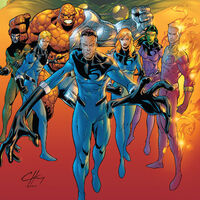 The history of the Fantastic Five (nee Four) of Earth-982 paralleled that of their Earth-616 counterparts until roughly the birth of Spider-Man's first child.

The original Fantastic Four evolved into the Fantastic Five after an encounter with Hyperstorm in the Negative Zone. Injuries forced Mister Fantastic and the Invisible Woman to remain behind in the Zone, and so the Human Torch stepped up as the new leader of the Fantastic Five, with his wife Lyja and the Richards' son Franklin filling out the roster.[1]

Nowadays, the Fantastic Five remain one of the premier super-teams on the planet, based out of the Five Freedoms Plaza in New York. When Dr Doom was sighted in Latveria, the United Nations asked the F5 to investigate. But, as a favour to Stinger, who had lived with them for a time when her father worked for them, they allowed the Avengers to take their place. [2]

Retrieved from "https://marvel.fandom.com/wiki/Fantastic_Five_(Earth-982)?oldid=5478703"
Community content is available under CC-BY-SA unless otherwise noted.