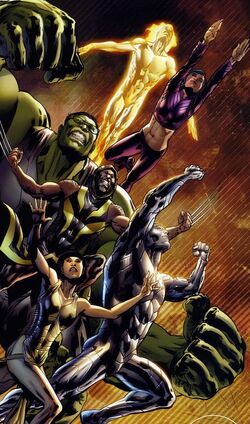 Base of Operations
Nu-World
Affiliations

Fantastic Force were a group from the distant future that returned to the present. Originally known as the new Defenders, they kidnapped Doctor Doom and the Human Torch to use them as a power source for a time travel device that was made from the dead body of their times Galactus. The whole plan of the Defenders was led by the future Sue Storm. In the end Reed Richards and the present time Sue Storm not only found a home for the future refugees, but also freed Doctor Doom and the Human Torch. In what should have been a happy ending Doctor Doom killed the future Sue Storm, to "restore his honor."[2]

Retrieved from "https://marvel.fandom.com/wiki/Fantastic_Force_(Earth-807128)?oldid=5567055"
Community content is available under CC-BY-SA unless otherwise noted.