Appearing in "The Day of Reckoning"

Synopsis for "The Day of Reckoning"

On New Moord, the new homeworld of the Brotherhood of the Badoon, the Unseen observes from afar as a member of the Reckoning offers ancient weapons to the Badoon, who note the Reckoning's role in aiding the Cotati in the recent war.

The Unseen returns to the Watcher at the Blue Area of the Moon and reports the Reckoning have been supplying Watcher-made weapons for the Badoon and other warlike races across the universe. After Fury assures Uatu that there's no Watcher interference involved, Uatu sounds the clarion call for other Watchers to return to their homeworld. He then explains to Fury that they can't let the enemy hear what they know, but as Uatu is about to leave in order to plan an intercession with his fellow Watchers, a Badoon ship, having overheard, opens fire on the moon, destroying it.

As debris from the moon rains down upon New York, Spider-Man, the Fantastic Four, X-Men, and Avengers show up to protect the civilians from the storm. Mister Fantastic checks his contacts in Wakanda and S.W.O.R.D. to find out what's going on behind the moon's destruction, and is informed that an alien invasion may be imminent. The Badoon then arrives and engages battle with the superheroes.

Meanwhile, on the city streets, The Thing tells his family to head into the Baxter Building with Franklin and Valeria for safety as he fights off the Badoon. As Valeria notes that the weapons the Badoon currently have are not of their own creation, Jo-Venn saves his father from being shot from behind. Ben takes a moment to admonish his son for any further fighting.

Back in the skies, Reed, having heard Valeria, becomes interested in the Badoon's weapons, and the Invisible Woman steals one of the weapons for him to analyze. Reed confirms the weapons to be of Watcher technology, and the Fantastic Four soon launch the Marvel-2 into space as the rest of New York's resident superheroes continue to handle the calamity. Meanwhile, She-Hulk spots Justices Love and Peace, who are confirming to the Time Variance Authority that a Reckoning War Scenario is underway. Recognizing them from when they originally told how she's responsible for the war, She-Hulk pleads the Justices to help save the world, only to be told that they can't, as they need to move the TVA into null space until the war is over. As the Justices leave, Jack of Hearts, who can't perceive the Justices, tells She-Hulk to stop talking to thin air and focus on the invasion.

The Silver Surfer has been summoned to the Overspace, and as he meets the Griever at the End of All Things, he realizes that the Griever's presence means Eternity's death is imminent. The Surfer refuses to accept the end, stating as long as the Never Queen lives, so does hope. The Never Queen shows the Surfer that Eternity has been poisoned by war breaking out across the universe, indicating that the First War has begun anew, and the Surfer is capable of ending it. The Surfer returns to physical space, nobly accepting his responsibility.

On Castle Doom in Latveria, Doctor Doom and his army are battling the Badoon. Recognizing the Badoon's weapons are beyond their technology, Doom decides to investigate the matter, leaving Victorious to defend Latveria from the invasion.

200,000 miles from Earth, the Human Torch destroys the last of the large moon chunks entering the planet's atmosphere, noting that the cosmic rays in his body are forcing him to continue to burn in airless space. As the Fantastic Four survey the remnants of the moon, they are attacked by the Unseen. Johnny captures him and initially assumes he's allied with the Badoon, but then recognizes him as Nick Fury and brings him aboard the Marvel-2. Fury tells the Fantastic Four about the Reckoning and how they attempted to silence him and the Watcher. Fury notes that Uatu had recorded all the information on the Reckoning in the Cyclopedia Universum, and Reed decides to read it against Fury's warning.

In the Cyclopedia, Uatu recounts the time the Watchers gave the Prosilicans the knowledge and technology to elevate their race, and how the Prosilicans used their resources for conquest and destruction, becoming known to the rest of the universe as the Reckoning. On the Day of Reckoning, the Prosilicans' enemies struck back with an ultimate weapon, the fallout of which would have wiped out the entire universe had the Watchers not interceded and erected a protective barrier to contain it. The Watchers swore never to interfere again unless the Reckoning rises again.

Fury, Johnny, Ben, and Sue watch as Reed begins to rave about the Cyclopedia's information, gaining the omniscience of a Watcher.

In the remains of Prosilicus, a Prosilican dubbing himself Wrath recalls how his ancestral home planet had fallen as the result of the Watchers' folly, then dons his helmet and declares he's bringing the universe the great gift of death.

FIFTEEN YEARS IN THE MAKING — AND IT ALL KICKS OFF HERE!

There was the First War. The greatest war to ever rage across the Multiverse. Today, it is reignited. This is the Day of Reckoning.

And all that stands between all of reality and revenge from the dawn of time are the heroes of Earth, the Fantastic Four and the mind of Mister Fantastic.

Starring the FF, She-Hulk, Jack of Hearts, the Unseen, the Silver Surfer and everyone in the whole damn Marvel Universe. 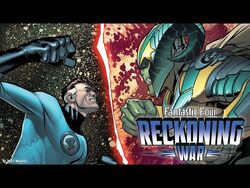