MPAA: PG for sequences of action violence, some mild language and innuendo

The forces that made them fantastic, will give rise to a new power, and nothing will ever be the same.

Set two years after the first film, Reed Richards and Sue Storm are preparing for their wedding. A silver object enters Earth's atmosphere, radiating cosmic energy that creates massive molecular fluctuations and causes deep craters at locations across the Earth. The government approaches Reed to build a sensor to track the movements of the object.

As the wedding begins (humorously, Stan Lee has a cameo where he attempts to enter the wedding), Reed's systems detect the phenomenon approaching New York City, causing a massive power blackout. The object destroys the sensors while the Fantastic Four protect the crowd. The Human Torch pursues the object, discovering that it is a humanoid, a "Silver Surfer." He confronts the Surfer, who drags Johnny into the upper atmosphere where the lack of oxygen and low air pressure snuffs his flame out, then drops him back toward Earth. Johnny manages to reactivate his powers and survives the fall. Later, when Sue tries to comfort Johnny, she touches his shoulders and their powers switch - he becomes invisible, and she is set on fire; when they touch again their powers revert back. Reed's examination of Johnny reveals that exposure to the Surfer has set Johnny's molecular structure in flux, allowing him to switch powers with his teammates through physical contact. Tracing the cosmic energy of the Surfer, Reed discovers that a series of planets the alien had visited before Earth have all been destroyed.

The Surfer has been creating a number of deep artificial craters around the globe. Reed determines that the next crater will appear in London, and the team travel there. They are just in time to avert the destruction of the London Eye by the effects of the Surfer's passing, and save its passengers, although the rescue is jeopardized when Johnny accidentally touches Reed and switches powers with him. The Surfer departs, and the Thames drains into the crater.

The Surfer's movements around the globe bring him past Latveria, where the cosmic energy affects Victor Von Doom, freeing him from two years as a metal statue. Doom, able to move again but scarred, traces the Surfer to the Arctic and makes him an offer to join forces. When the Surfer rebuffs him, Doom attacks. The Surfer returns fire, blasting Doom through the ice. The cosmic energy of the Surfer's blast heals Doom's body, reversing the changes seen in the first film.

Doom leverages his experience into a deal with the American military, who force the Fantastic Four to work with Doom. Deducing that the Surfer's board is the source of his power, from the pulse beginning that it, Reed develops a pulse generator that will separate him from it, while Victor, who was supposed to be helping Reed, is working on some other unknown remote-like machine. While setting up the device, Sue is confronted by the Surfer, during which he reveals he is merely a servant to the destroyer of worlds, and regrets the destruction he causes. The military opens fire on the Surfer, which distracts him and allows the four to fire the pulse, separating the Surfer from his board. The military imprisons the Surfer in Siberia and forbids the Fantastic Four from interacting with him, while they torture him for information. Sue uses her powers to sneak into his cell, where she learns more information from the Surfer. He tells her his master was known by the people of his world as Galactus, a massive cloud-like cosmic entity which must feed on life-bearing planets to survive, and that his board is a homing beacon which even now summons him to the planet.

Doom, pursuing the power in the board, steals it from the compound, using the device he secretly created earlier to gain control of the board and its powers. The Fantastic Four rescue the Surfer, and pursue Doom in the Fantasticar, confronting him in Shanghai. During the battle, Sue is mortally wounded. With the Surfer powerless, Johnny absorbs the combined powers of the entire team in order to battle the cosmic energy-empowered Doom. Johnny succeeds in breaking Doom's control over the Surfer's board, while Ben Grimm uses a nearby crane to knock Doom into the harbor where he is last seen sinking; however, Galactus has already arrived, and Sue dies in Reed's arms. The Surfer regains the control of his board, and his power is restored. He revives Sue and chooses to defend Earth, flying into Galactus and confronting him. The conflict results in a massive blast of energy, apparently destroying Galactus.

The film ends with the marriage of Reed and Sue in Japan, and the team's creation of their signature "4" in the sky with the Fantasticar. The credits cut back to a shot of the Silver Surfer's seemingly lifeless body floating through space. Just as he drifts off the edge of the screen his eyes open and his board races towards him. 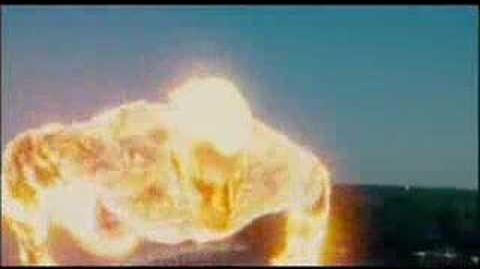 Retrieved from "https://marvel.fandom.com/wiki/Fantastic_Four:_Rise_of_the_Silver_Surfer_(film)?oldid=6090908"
Community content is available under CC-BY-SA unless otherwise noted.