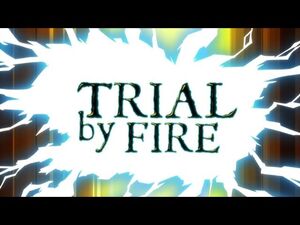 The Smurfs got big

Appearing in "Trial By Fire"

Synopsis for "Trial By Fire"

After destroying a Kree Proibe, Johnny inexplicably disappears. He finds himself in a stadium filled with aliens, where he has been put on trial for crimes against the Kree empire, with Ronan the Accuser acting as judge. Meanwhile, Ben attempts to entertain the guests at a charity event. Reed is summoned to act as Johnny's lawyer, while Ben and Sue are summoned as witnesses. Unfortunately Ben and Sue's testimonies fail to help Johnny's case. Johnny is sentenced to immediate execution by robotic creatures. Ben, Sue, and Reed fight the robot executioners, one of which is accidentally thrown into the crowd. Johnny protects a Kree child in the audience from the errant robot, which inspires the crowd to demand Johnny be exonerated and released. Feeling humiliated at having to appease the crowd, Ronan releases Johnny. The Kree return to their home world, whereupon Ronan is banished from the Kree empire, while the Supreme Intelligence notes that the Fantastic Four may be useful against the Skrull.

Like this? Let us know!
Retrieved from "https://marvel.fandom.com/wiki/Fantastic_Four:_World%27s_Greatest_Heroes_Season_1_1?oldid=6497266"
Community content is available under CC-BY-SA unless otherwise noted.