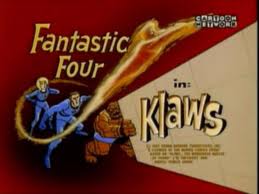 Reed Richards is exploring sub-space with his equipment while Johnny takes a vacation. Soon however, Klaw, the master of sound arrives at the Baxter Building and attacks the remainder of the team with sonic booms. He traps Reed and Ben with a wall of solid sound waves, but Ben breaks through. Klaw tries to get Sue to call back Johnny, but she resists, and Ben attempts to stop him. Klaw defeats Ben with another sonic blast, but Johnny returns with vibranium bands after Reed gets a message to him. Now all assembled, the Fantastic Four then does battle with the powerful Klaw.

Based on "Klaw, The Murderous Master Of Sound!" in Fantastic Four Vol 1 56.

Retrieved from "https://marvel.fandom.com/wiki/Fantastic_Four_(1967_animated_series)_Season_1_1?oldid=5224238"
Community content is available under CC-BY-SA unless otherwise noted.