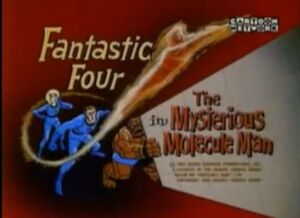 Appearing in "The Mysterious Molecule Man"

Synopsis for "The Mysterious Molecule Man"

A meteor from deep space lands on a remote farm, and after Reed studies it back at the Baxter Building, he discovers that it has energy-absorbing properties. As the meteor is sealed in the lab's vault, the team notice a strange green glow outside, and an individual calling himself the Molecule Man performing seemingly impossible feats. He proclaims himself leader of the city, but the Four quickly appear to challenge him. He tells the team that he was once a lab technician who was transformed in an atomic accident, and now has the power to rearrange all molecules. The Molecule Man then meets with the Pentagon and forces them to accept his rule. Reed develops an electrode gun to prevent Molecule Man's powers from working on specific objects, while the villain himself takes over the city. Reed manages to drive the Molecule Man off with the use of the electrode gun, and then use it to coat one of the last tanks unaltered by him. The team then use the tank to confront the Molecule Man for the final battle.

Retrieved from "https://marvel.fandom.com/wiki/Fantastic_Four_(1967_animated_series)_Season_1_10?oldid=5224265"
Community content is available under CC-BY-SA unless otherwise noted.