"Danger in the Depths" 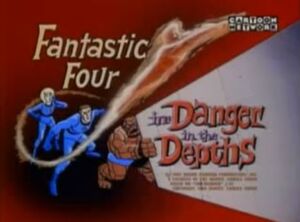 Episode Title
"Danger in the Depths"

Appearing in "Danger in the Depths"

Synopsis for "Danger in the Depths"

Johnny is testing his ability to throw flares when he notices a strange object emerging from the sea. A blue-skinned woman emerges and introduces herself as Lady Dorma of Pacifica. She asks the Fantastic Four for help in fighting the tyrant Attuma, whom she inadvertently allowed to defeat the kingdom's rightful ruler, Prince Triton. Realizing her mistake, she sought out the help of the Four to help stop Attuma's conquest. Reed uses an oxy-spray to help the team breathe underwater, and together with Dorma they journey to Pacifica. They proceed to battle Attuma's forces and make their way into the royal palace. There, the meet up with Prince Triton and assist him in his struggle against Attuma and his forces.

Retrieved from "https://marvel.fandom.com/wiki/Fantastic_Four_(1967_animated_series)_Season_1_11?oldid=5224266"
Community content is available under CC-BY-SA unless otherwise noted.