"Demon in the Deep" 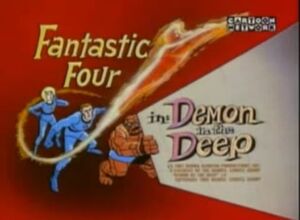 Episode Title
"Demon in the Deep"

Appearing in "Demon in the Deep"

Synopsis for "Demon in the Deep"

Reed has been elected to ask the villainous Professor Gamma to surrender himself and to destroy his Island X base in order to answer for his crimes against the world. Reed and the rest of the Four then attack the island and defeat the Professor's henchmen, destroying the Professor's nuclear missiles. Gamma himself was not on the island and due to the radiation released from his nuclear warhead, is mutated into an amphibious form and now calls himself the Gamma Ray. Johnny, having been told to rest after the last mission, gets angry and leaves the team, staying in a slum hotel. There, he is told a tall tale by one of the residents who says that he saw a strange creature at sea calling himself the Gamma Ray the other day. Suspecting a link to Professor Gamma, Johnny decides to investigate for himself and quickly finds Gamma Ray. They fight, and Gamma Ray then mutates a giant whale into a creature named Giganto, who then begins to walk towards New York. As the creature gets to New York, the Four then have to devise a plan to stop it, and its master, Gamma Ray.

Retrieved from "https://marvel.fandom.com/wiki/Fantastic_Four_(1967_animated_series)_Season_1_12?oldid=5224267"
Community content is available under CC-BY-SA unless otherwise noted.