"Return of the Moleman" 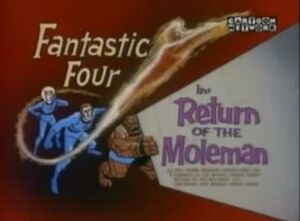 Episode Title
"Return of the Moleman"

Appearing in "Return of the Moleman"

Synopsis for "Return of the Moleman"

An earthquake rocks New York, and Johnny spots that the whole city block has disappeared into the Earth's surface. Reed quickly deduces that this was the work of the Mole Man. The villain himself sinks Science Hall where Sue was giving a speech to a group of leading scientists, and tells the rest of the team not to interfere with his plans. Reed, Ben and Johnny descend into the Earth's surface to the Mole Man's subterranean hideout, but after he threatens Sue, the team are returned to the surface to warn off the national guard from attacking his base. Back at the Baxter Building, Reed develops a tracker to find Sue, and Johnny digs a tunnel for Ben and Reed's hover-cycle to travel down. After freeing Sue, the now-reunited Four have to fight the Mole Man and his forces in order to free all of his hostages and raise the missing buildings.

Retrieved from "https://marvel.fandom.com/wiki/Fantastic_Four_(1967_animated_series)_Season_1_13?oldid=5640813"
Community content is available under CC-BY-SA unless otherwise noted.