"It Started On Yancy Street" 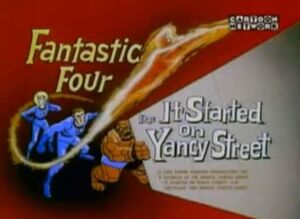 Appearing in "It Started On Yancy Street"

Synopsis for "It Started On Yancy Street"

As the Fantastic Four answer the Yancy Street Gang's challenge to Ben, they quickly discover that it was a trap, and are attacked by three mutant apes. The Red Ghost then appears, having escaped from the Moon, and takes the Four back to the Moon in his rocketship. He jettisons the team to the Moon's surface, and with the help of Sue's force field, quickly attempt to make their way to the inhabitable Blue Area of the Moon. They end up inside the underground home of the Watcher, who tells them by thought-image that he cannot help them against the Red Ghost, and warns them not to touch any of the machines in his lab for their own safety. Meanwhile, the Red Ghost hold the world to ransom, but his rocket is soon brought back down to the Moon by Reed. The Red Ghost follows Johnny back to the Watcher's base, and there, the Four have to stop the villain and his super apes.

Retrieved from "https://marvel.fandom.com/wiki/Fantastic_Four_(1967_animated_series)_Season_1_14?oldid=5224269"
Community content is available under CC-BY-SA unless otherwise noted.