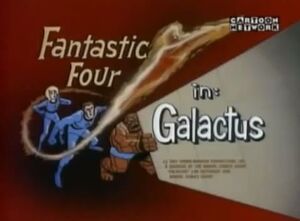 Another Sun suddenly appears in the sky, which soon disappears and gives way to millions of floating rocks in the sky. A being known as the Watcher appears to the team and tells them that he caused the illusions, trying to hide the Earth from the Silver Surfer, a being who serves Galactus, who drains planets of their energy. Unfortunately, the Surfer finds the Earth and signals Galactus, who quickly announces that he will drain this world as he has done others. Ben knocks out the Surfer, who is then found and looked after by Sue, while the rest of the team try to fight Galactus. As Sue cares for the Surfer, who quickly begins to appreciate humanity, Galactus begins construction of his Elemental Convertor to drain the Earth's energy. The Watcher sends Johnny on a journey to Galactus' space station to retrieve a weapon known as the Ultimate Nullifier, and the Silver Surfer decides to betray his master and assist the Fantastic Four in defeating Galactus.

Like this? Let us know!
Retrieved from "https://marvel.fandom.com/wiki/Fantastic_Four_(1967_animated_series)_Season_1_15?oldid=6501542"
Community content is available under CC-BY-SA unless otherwise noted.