"The Micro World of Dr. Doom" 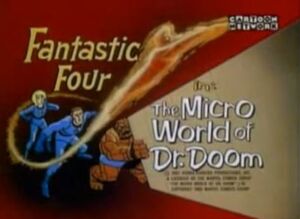 Appearing in "The Micro World of Dr. Doom"

Synopsis for "The Micro World of Dr. Doom"

Whilst Ben is delivering a piano across town, he starts shrinking until only a couple of inches tall. The same thing happens to Sue while out shopping, Reed while testing a new aircraft and Johnny while fixing his car. They all eventually make it back to the Baxter Building where they hear a voice warning them to beware Dr. Doom. The Four are nearly sucked into an air vent, while Doom and his captive, Princess Pearla watch. The team escape thanks to Johnny's help, and are then shrunk further until they end up on a micro world controlled by Doom. The fight Doom's new army, but he shrinks them even further and tells the team how he accidentally discovered and subsequently conquered the micro world. Now captured by Doom, the miniature team meet up with the King and his daughter. In their prison, Doom tells the team of how he will use lizard-men from a nearby micro world to help him in his conquest of the micro-universe. The Four must escape their confinement and stop Doom's plans.

Like this? Let us know!
Retrieved from "https://marvel.fandom.com/wiki/Fantastic_Four_(1967_animated_series)_Season_1_16?oldid=6501543"
Community content is available under CC-BY-SA unless otherwise noted.